Nigerian man with symptoms of Ebola quarantined in Spain 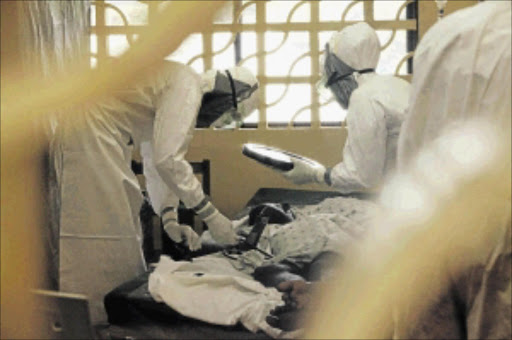 DANGEROUS TASK : Dr Kent Brantly, left, of Samaritan's Purse relief organisation is shown in this undated handout photo , wearing personal protective equipment as he cares for e bola patients at the case management centre on the campus of ELWA Hospital in Monrovia, Liberia. Brantly, a 33-year-old American doctor, is fighting for his life after contracting the ebola virus in Monrovia, Liberia photo: Samaritan's Purse/REUTERS

A Nigerian man exhibiting Ebola-like symptoms has been quarantined in southern Spain, while Kenya has said it will ban passengers travelling from virus-hit areas in West Africa starting Tuesday.

While the World Health Organisation declared the Ebola outbreak in West Africa an international health emergency and said it was moving faster than could be controlled, aid groups have warned that efforts to stem the epidemic were "dangerously inadequate."

Officials in Alicante, southern Spain, said the Nigerian man checked into a hospital with a fever. Doctors determined that he was suffering from Ebola-like symptoms, and he was referred to a special isolation clinic for tests.

Ebola claimed its first European victim five days ago and has killed 1,145 people in Guinea, Liberia, Nigeria and Sierra Leone, according to WHO.

On Saturday, Kenyan Health Minister James Macharia said all passengers travelling from Sierra Leone, Liberia and Guinea would be barred entry to Kenya, after four visitors from these countries had shown Ebola-like symptoms.

The ban will significantly hamper travel across the continent as Nairobi airport is a crucial connection for African air travel.

"WHO has admitted the magnitude of the Ebola outbreak in West Africa was vastly underestimated and the current outbreak is expected to continue for sometime," Macharia said.

While WHO had called on the affected countries to postpone mass gatherings if possible and to screen outbound air travellers, it did not recommend a general travel ban to and from West Africa.

WHO also stressed that designating the Ebola epidemic a "Public Health Emergency of International Concern" does not mean that it expects the virus to spread around the globe, but that it wants all countries to be more vigilant.

Meanwhile, Nigerian Health Minister Onyebuchi Chukwu said that a female doctor who was infected in Lagos has become the first person to recover.

The woman - who fell ill after coming into contact with Liberian-American government official Patrick Sawyer, who subsequently died from the disease - has been discharged from hospital, the minister said.

Five others who had been placed under surveillance "have almost recovered", he said.

Governments across Africa are ramping up measures to stop the worst-ever outbreak of the disease from spreading across the continent.

In the Liberian capital Monrovia - one of the worst-hit cities - 17 Ebola patients escaped from an isolation centre in a densely populated slum after the government said it would quarantine the entire community.

The West Point slum, which is home to around 75,000 people, is considered a hotbed for disease, crime and drugs. Dozens of residents helped the patients to escape from the unit, while shouting slogans against President Ellen Johnson Sirleaf's Ebola policies.

The current outbreak is caused by the most lethal strain in the family of Ebola viruses. Ebola causes massive haemorrhages and has a fatality rate of up to 90 per cent. It is transmitted through blood and other body fluids.