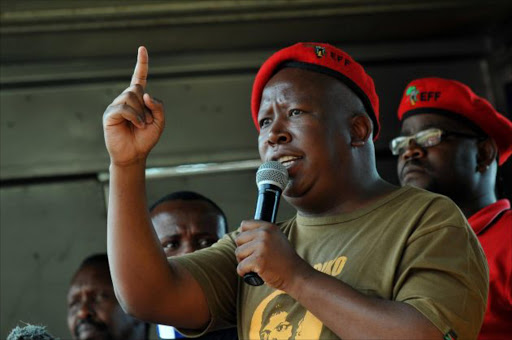 "Mandela said aluta continua -- the struggle continues. He was talking about the economic struggle," said Malema.

He said, as a leader of Umkhonto we Sizwe, Mandela was one of the first people to be trained on how to use arms.

"You don't take up arms and go and kiss people," said Malema.

"You pick up arms to kill... Madiba was ready to kill for this country."

He was speaking at a public lecture at the University of Limpopo's Medunsa campus situated in Ga-Rankuwa outside Pretoria.

He urged the youth to follow in Mandela's footsteps.

"Mandela said aluta continua -- the struggle continues. He was talking about the economic struggle," said Malema.

Thousands of people, mostly clad in the EFF red berets and T-shirts packed the hall to listen to Malema speak.

He said he was not against the ANC.

"I raised some of these issues while in the ANC and I won many debates. They decided this one is troublesome. He must go," said Malema.

He said he was, however, against the fact that the African National Congress pushed the National Development Plan which would not benefit the people.

Speaking in English and Sepedi, Malema told them they had been fooled into believing they had benefited from the new, democratic South Africa.

"Twenty years into democracy but many young people see flushing toilets for the first time when they come here [university campuses]," Malema said.

He said in rural areas, government gave people dry taps and at times water pipes but they failed to give people actual water.

When government mentioned their progress, however, they counted people with these things as people who had been given water.

Malema said: "They raise your hopes up high... It's better to know that at all, you don't have."

He touched on the country's economy, and dismissed the positive outcomes of the black economic empowerment.

"Black people who are in business with white people are economy security guards," Malema said.

His comment was met by loud applause and laughter.

"They are protecting the interests of white people," he said.

He claimed people like Deputy President Cyril Ramaphosa and mining magnate Patrice Motsepe were some of those who were "economy security guards".

Malema said Ramaphosa's alleged role in the Marikana shootings was a testament to his role of protecting white men's money.

Police shot dead 34 people, mostly striking mine workers, in a clash at the Lonmin Platinum Mine in Rustenburg on August 16, 2012.

Ten other people, including two police officers and two security guards, were killed in the preceding week.

Ramaphosa, a Lonmin shareholder at the time, was alleged to have requested police to act to end the strike action.

Malema went on to say if Motsepe really owned all those millions, he would have made a difference in the lives of people.

The crowd sang in approval: "Julius Malema, there's none like you."

University students and the public attending the lecture were then allowed to ask Malema questions.