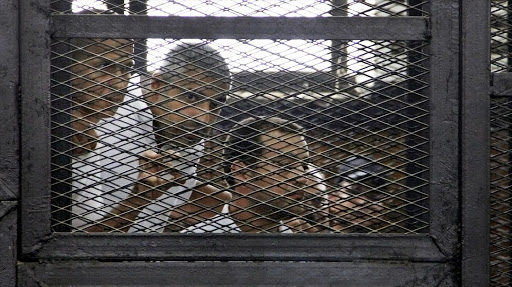 Egypt was under mounting pressure Tuesday to pardon three Al-Jazeera journalists, including Australia's award-winning Peter Greste, jailed in a ruling that sparked global outrage and fears of a growing media crackdown.

Eleven defendants tried in absentia, including one Dutch journalist and two Britons, were handed 10-year jail terms, also on charges of aiding the blacklisted Muslim Brotherhood and "spreading false news".

Australia said it was "appalled" at the verdict and US Secretary of State John Kerry spoke of "a chilling and draconian sentence", while the United States led calls for President Abdel Fattah al-Sisi to free the journalists.

"We call on the Egyptian government to pardon these individuals or commute their sentences so that they can be released immediately, and grant clemency for all politically motivated sentences," said White House spokesman Josh Earnest.

Australian Foreign Minister Julie Bishop said the case was clearly politically motivated and that she would petition Sisi to intervene.

"The new Egyptian government has an opportunity to prove to the world that it is on the path to democracy, that it does believe in freedom of speech and freedom of the press, which are the pillars of democracy," she said.

Greste's elderly parents, who had been hoping for an acquittal, said they were "shattered" by the decision but vowed to battle on for the sake of press freedom.

"This is a very dark time not only for our family, but for journalism generally," his father Juris Greste told a press conference.

"There will always be people, governments, and institutions wanting to limit the speaking of one's mind and telling the way we see," he said, repeating the catchcry of the defence campaign: "Journalism is not a crime."

All the defendants had been accused of aiding the Brotherhood and tarnishing Egypt's reputation after the army ousted Islamist president Mohamed Morsi in July 2013.

Nine of the 20 defendants were on the staff of Al-Jazeera, the Qatar-based pan-Arab news channel which has come in for strong criticism in Egypt over its coverage of a deadly crackdown on Morsi's Brotherhood.

Cairo considers Al-Jazeera to be the voice of Qatar and accuses Doha --which has denounced the repression of the Islamist movement's supporters which has left more than 1,400 people dead -- of backing the Brotherhood.

In Doha, Al-Jazeera chief Mustafa Sawaq condemned the verdict, charging that evidence provided by the prosecution "was not enough to jail someone for a single day".

Several countries announced plans to summon Egyptian ambassadors to protest what many called an unjust verdict.

In The Hague, Foreign Minister Frans Timmermans said he had summoned Egypt's ambassador and would raise the matter with his EU colleagues after Dutch journalist Rena Netjes, tried in absentia, "did not get a fair trial".

London said it was "completely appalled" by the verdict in absentia against the two Britons and was summoning Cairo's envoy.

Human Rights Watch's Joe Stork said the verdict showed "how Egypt's judges have been caught up in the anti-Muslim Brotherhood hysteria fostered by President al-Sisi".

UN rights chief Navi Pillay slammed such mass trials and sentences as "obscene", and urged Egypt to review its laws.

But Cairo insisted its judiciary "enjoys full independence" and that the convicts in Monday's case still have the right to appeal.

A presidency official said Sisi "legally can't (pardon them)... a pardon can be given only after the final court ruling".

Greste's parents said they were still considering their legal options and whether to lodge an appeal, which could take months to make its way through the courts.

Of the six defendants in custody along with Greste, Fahmy and Mohamed, four were sentenced to seven years and two were acquitted.

"All journalists should fear for themselves now that there is no justice. Politics is the master," said defence lawyer Shaaban Saeed.

The 16 Egyptians on trial were convicted of belonging to the Brotherhood, which the military-installed government designated a "terrorist organisation" in December.

The four foreigners -- Greste, Netjes and Britons Sue Turton and Dominic Kane -- were alleged to have collaborated with their Egyptian co-defendants.

The defendants had dismissed the evidence as "fabricated".

Prosecutors showed video from a tourism report, not even produced by Al-Jazeera, and images and audio recordings in which the defendants were alleged to have falsely portrayed a "civil war".

Greste is a former BBC reporter who won the 2011 Peabody Award for a documentary on Somalia, while Fahmy previously worked with CNN.