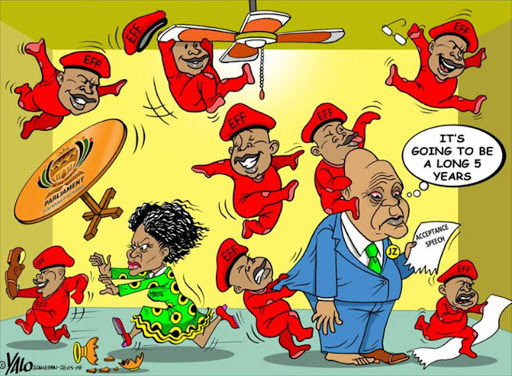 "At the risk of giving the sensation-seeking Malema even more exposure, the CDP reacts with disgust to his disregard for parliamentary protocol," leader Theunis Botha said in a statement.

"In his maiden speech, reacting to President [Jacob] Zuma's state-of-the-nation address, he abused this esteemed platform, by using it for his brand of cheap politicking."

In his speech on Wednesday Malema made several contentious statements, including that Zuma's government was directly responsible for the Marikana shootings.

"The ANC government massacred those people in Marikana," Malema said.

He was referring to the shooting of 34 protesting mineworkers in a clash with police in Marikana, North West, in August 2012.

An African National Congress MP rose and demanded he withdraw his statement.

When Malema refused National Council of Provinces chairwoman Thandi Modise told the House she would take advice and rule on Malema's remarks on Thursday.

MPs interrupted Malema several times during his speech to object to his statements. He attacked the ANC for protecting "white monopoly capital" and accused Zuma of being scared of whites.

Zuma was accused of lacking courage and selling out the revolution. Whites who did not make an effort to learn an indigenous South African language were criticised.

"If you have a white friend as a black person and he or she doesn't know your language or is not taking the initiative to learn your language that person is no friend at all," Malema said.

Freedom Front Plus MP Pieter Groenewald rose and asked Malema why he did not deliver his speech in his mother tongue rather than in the "white man's language of English?"

When Modise asked Malema if he would like to respond, he replied with a terse: "I have no time for racist questions."

Botha said it seemed inconceivable anyone could address someone like Malema as "honourable", when he not only dishonoured his position, but in doing so dishonoured the whole country. MPs refer to each other as "honourable member".

Malema's past history of not paying R16 million in tax to the SA Revenue Service (Sars) was an example of him being less than honourable, Botha said.

At the end of May, Malema came to an agreement with Sars to settle his tax bill. According to court papers, Malema owed Sars R16 million plus interest after failing to submit tax returns between 2006 and 2010.

Botha said Malema's attack on whites showed he was incapable of acknowledging the privileges he presently enjoyed were the result of a negotiated agreement.

It would appear that all Malema could do was lash out at anything that exposed his mediocrity, he said.