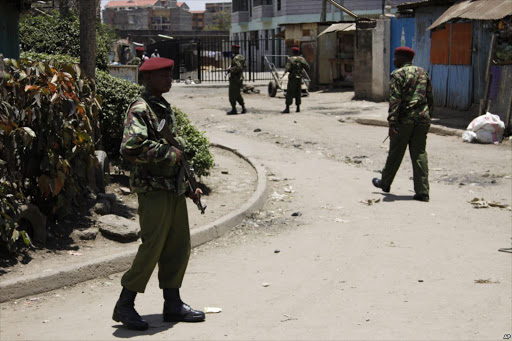 Kenyan police said Monday they faced an angry mob in the country's northeast after two suspected "terrorists" were killed at the weekend near the Somali border.

The two men were shot dead Saturday night after trying to force their way through a barricade near Mandera, a small border town. A third man in their vehicle managed to escape, the local police chief, Noah Mwivanda, told AFP.

"On reaching the police road barrier ... the terrorists defied an order by the officers to stop and instead retorted to hurling three hand grenades at them. But our officers gallantly engaged them in a fierce gun fight, killing two of them instantly," he said.

Police said eight grenades were found in the vehicle.

"Those who were killed were Al-Shebab operatives," said Mwivanda, referring to the Somali insurgent group. They were "planning to carry out deadly grenade attacks," he added.

But the killings sparked anger in Mandera, where a respected local sheikh said the men were innocent.

"It could be possible the terrorists we killed, could be people known to the local people. But these people protesting are not aware of what these culprits were involved (in) before," said Mwivanda in response.

Army spokesman Emmanuel Chirchir said on his Twitter account that police and the military had "shared information that three suspects presumed to be armed with explosives were travelling to Mandera for a terrorist operation."

The Mandera region, like the rest of the 700-kilometre (435-mile) border zone between Kenya and Somalia, has seen numerous attacks attributed to the Shebab and their allies since Nairobi sent its army across the border to combat the insurgents in 2011.

The Shebab recently threatened to shift their conflict to Kenya and attacks have multiplied since March in its two largest cities, Nairobi and Mombasa.