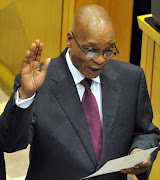 President Jacob Zuma taking the Oath of Office during the swearing in of Members of Parliament. 21/05/2014, Elmond jiyane. GCIS

President Jacob Zuma on Sunday named Nhlanhla Nene as his new finance minister and moved former treasury chief Pravin Gordhan to the local government ministry in a Cabinet that retained 14 ministers in their old portfolios.

Zuma moved former police minister Nathi Mthethwa from the security cluster to the arts and culture portfolio in what could be seen as the demotion of a close ally in response to the 2012 killing of striking mineworkers at Marikana in the North West.

The new police minister is Nkosinathi Nhleko - a former director general in the labour department.

Former mineral resources minister Susan Shabangu loses her portfolio to Ngoako Ramathlodi - the former deputy minister of correctional services - and will head the new ministry for women, which will be located in the presidency.

In another shake-up in the security cluster, former intelligence minister Siyabonga Cwele has been moved to a new ministry of telecommunications and postal services -- created to shape the fast-growing sector as well as the post office's role in delivering financial services to remote areas, Zuma said.

David Mahlobo, a top official at the department of co-operative governance, becomes the new minister of state security.

The president also created a new ministry of small business development, in line he said, with his second term's stated mission of focusing on growing the economy and creating jobs.

That ministry will be led by Lindiwe Zulu - who has served as Zuma's international affairs advisor.

However, she will no longer handle water affairs, as that was given to a new ministry of water and sanitation to be headed by former Gauteng premier Nomvula Mokonyane.

Lindiwe Sisulu becomes minister of human settlements - a post she has held in the past.

Zuma announced the creation of a new information ministry that will deal with all government communication and branding, and include the SA Broadcasting Corporation and the Independent Communications Authority of SA (Icasa).

It will be headed by Faith Muthambi, who has been an ordinary ANC MP.

Malusi Gigaba, the previous incumbent, was moved to home affairs. There he replaces Naledi Pandor, who moves to science and technology, a post she has previously held.

Collins Chabane leaves the presidency to become the new minister of public service and administration, in what can be seen as a natural progression from his former role as oversight minister.

Enver Surty held on to the post of deputy minister of basic education.

Zuma said his new Cabinet had been given the task of stepping up delivery and overseeing a "radical phase of socio-economic transformation".

"The team will implement the five-year medium-term strategic framework of government which has been developed using the National Development Plan and the ANC manifesto," he said.