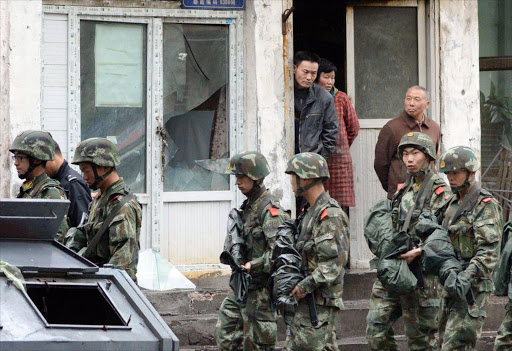 Mrs. Zhang had just bought her morning fruit and vegetables when an explosive tossed from one of two speeding SUVs slammed her to the ground.

Scrambling to her feet, and minus her shoes and hat, she fled while the two vehicles plowed through a crowd of shoppers before setting off more fiery blasts in the latest - and bloodiest - incident of violence in China's far northwestern Xinjiang region in recent months. The attack killed 31 mostly elderly people and wounded more than 90.

"The SUVs were mowing down people and goods alike," Mrs. Zhang, 71, said Friday at a hospital where she was being treated for crushed toes and other injuries.

"It is not safe here anymore. We don't have a sense of security," she said.

A day after the attack in Xinjiang's capital of Urumqi, survivors told of their terror during the attack and said they no longer feel insulated from a long-simmering insurgency against Chinese rule, which has struck their city twice in recent weeks.

While the perpetrators haven't been named, Chinese authorities have blamed recent attacks on radical separatists from the country's Muslim Uighur minority.

Xinjiang is home to the native Turkic-speaking Uighurs (pronounced WEE'-gurs) but has seen large inflows from China's ethnic Han majority in recent decades. Uighur activists contend that restrictive and discriminatory policies favoring the Chinese migrants are fueling the bloodshed. The knowledge that Muslims elsewhere are rising up against their governments also seems to be contributing to the increased militancy.

Zhang, who didn't want to give her full name out of fear of her safety, had four of her toes crushed but didn't know whether that was from a bomb or the ensuing stampede Thursday. She spoke to The Associated Press in a four-bed ward guarded by armed police at Urumqi's Traditional Chinese Medicine Hospital. Soon after, doctors and nurses drove reporters out.

Another woman in the ward, Mrs. Li, had been manning a public scale when she was knocked off her feet by one of the speeding SUVs and broke her hip. "It was so fast it was like a plane flying," said Li, 70.

Li spoke with defiance of the separatists seeking to overthrow Chinese rule in Xinjiang: "We are not going to give in. This is part of China."

Yet her daughter made clear that the danger of violence was now a much greater factor in the daily lives of Xinjiang's Chinese population.

"The violence used to be distant, but now I have my mother lying in the bed suffering. The danger is right here with us and we dare not go out," said the woman, who also declined to give her name.

Despite the previous day's mayhem, Urumqi was relatively calm Friday, with only a heightened security presence around the scene of the attack. The market itself was closed and dozens of police armed with automatic rifles and wearing body armor guarded access points.

The death toll was the highest for violence in Xinjiang since days-long riots in Urumqi in 2009 between Uighurs and Hans left almost 200 people dead, according to an official count. Thursday's attack also was the bloodiest single act of violence in Xinjiang in recent history.

Recent attacks show an audaciousness and deliberateness that wasn't present before. They are also increasingly going after civilians rather than police and government targets.

Urumqi was the scene of a bomb attack at a train station late last month that killed three people, including two attackers, and injured 79. Security in the city has been significantly tightened since that attack, which took place as Chinese President Xi Jinping was visiting the region.

In response to Thursday's attack, Xi pledged to "severely punish terrorists and spare no efforts in maintaining stability," Xinhua reported.

Public Security Minister Guo Shengkun, China's top police official, was dispatched to Urumqi as the head of a team to investigate the incident.

At a Thursday briefing in Beijing, Foreign Ministry spokesman Hong Lei said the incident "lays bare again the anti-human, anti-social and anti-civilization nature of the violent terrorists and deserves the condemnation of the world community and the Chinese people."

In Washington, the White House also put out a news release denouncing this "despicable and outrageous act of violence against innocent civilians" and noting that "the United States resolutely opposes all forms of terrorism."

Prior to last month's train station attack, Urumqi had been relatively quiet since the 2009 ethnic riots amid a smothering police presence. The sprawling metropolis' population of more than 3 million people is about three-fourths Han Chinese.

In March, 29 people were slashed and stabbed to death at a train station in the southern city of Yunnan. The attack was blamed on Uighur extremists bent on waging jihad.

The increasing frequency of attacks shows growing frustration among Uighurs over government policies seen as discriminatory, said Raffaello Pantucci, a terrorism expert at the Royal United Services Institute for Defense and Security Studies in London.

"The issues are not getting resolved, and in some ways are getting worse," Pantucci said. "People are left feeling they have no hope."