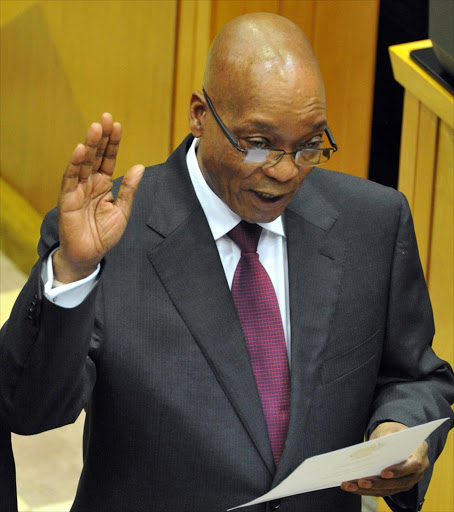 President Jacob Zuma taking the Oath of Office during the swearing in of Members of Parliament. 21/05/2014, Elmond jiyane. GCIS

Jacob Zuma has been the only candidate nominated in Parliament on Wednesday to serve a second term as President of South Africa.

The motion has been seconded in Parliament.

Chief Justice Mogoeng Mogoeng said that the nomination is compliant and he will accept it.

The DA attempted to object this, based on Rule 8, saying that Zuma is not fit and proper to fit the position, and that his conduct is in conflict with the Constitution.

Home Affairs Minister Naledi Pandor countered that it was a "frivolous motion" because, constitutionally, any member of the Assembly could be elected president.

The chief justice concurred that under section 86 of the Constitution this was the case, and reminded members that earlier in the day Zuma was indeed sworn in as one of the 400 members of the chamber.

"My ruling is therefore to dismiss the point raised without costs," Mogoeng quipped, before confirming Zuma's election as president.

The crowd outside chanted and cheered, "My President, My President" as the members of Parliament walked out.

Zuma will start serving his second term after his inauguration on Saturday, 24th May 2014 and is expected to announce his new cabinet on Sunday, 25th May.