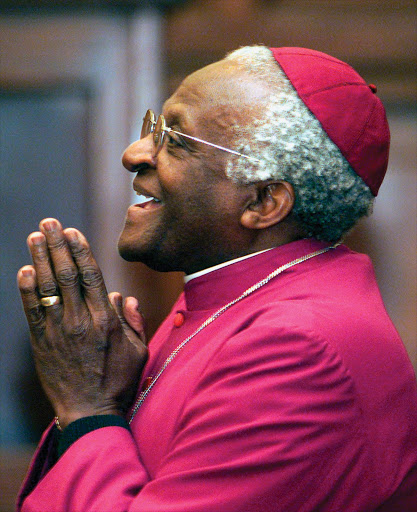 "There we go. Whoopee!" he said, pumping his fist in the air. "People were imprisoned. People suffered. So we mustn't waste it. We must keep remembering we got this at a very great price."

South Africans must be thankful they can vote peacefully, Archbishop Emeritus Desmond Tutu said as he cast his vote in Cape Town on Wednesday.

"I'm thinking of Ukraine. I'm thinking of South Sudan, you know, all of those things happening there," he said while shuffling into Milnerton High School with his wife Leah.

"We can vote and [it's] relatively peaceful, isn't it? Wonderful! Wonderful!"

Tutu, dressed warmly, used a wooden cane to support him as he walked past a long line of families waiting patiently in the sun.

Ever his charming self, he took off his black beret for photos, thanked those he was walking past and even chatted briefly with some members of the public.

A woman was overheard saying to her husband: "What a moment. How cool is that," as he got a cellphone picture of Tutu in the school hall.

Tutu slowly and painfully negotiated the wooden stairs leading down to the election officials and handed over his smart card ID.

A throng of cameras and television cameras bathed the couple in stark light.

Leah commented that she couldn't see because the lights were so bright.

They were both led to their voting booths and the media maintained a respectful distance.

Tutu emerged from the booth a few minutes later and placed his ballots in the provincial and national boxes.

"There we go. Whoopee!" he said, pumping his fist in the air.

"People were imprisoned. People suffered. So we mustn't waste it. We must keep remembering we got this at a very great price."

A journalist asked which party he had voted for.

Tutu let out one of his trademark high-pitched squeals and quipped that the journalist thought himself to be very smart.

"My vote is my secret," Tutu replied.

Not discouraged, the journalist then asked how his vote compared to the 1994 general elections.