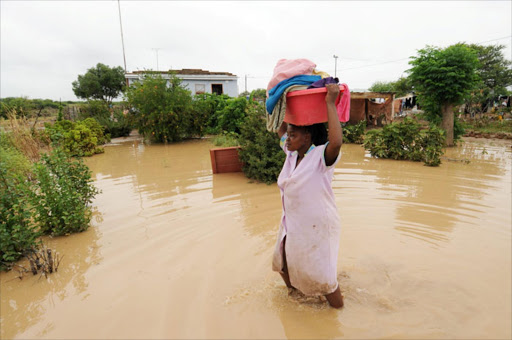 Several drownings and rescue operations were reported on Tuesday as persistent rain and flooding caused havoc in several parts of the country.

In Mpumalanga alone, 11 people drowned during the past week because of heavy rains. Another 12 were rescued.

Vehicles were also swept away in floods.

The SA Weather Service said flooding in the eastern parts of the country remained a risk due to high saturation caused by the rainfall.

Rainfall patterns would shift to the north-eastern parts of the country, including Gauteng, Mpumalanga, and Limpopo, on Wednesday.

"This would also bring an 80 percent chance of rain to the region," said Webster.

The rainy weather conditions were expected to clear up in the north-eastern regions by Friday.

The military remained on standby to help if necessary.

"[However] there has been no request from any department for such assistance as yet," Mabanga said.

Three children, aged between two and 11, were among the 11 people who had drowned last Tuesday.

Twelve people, including motorists whose vehicles were swept away when they attempted to cross flooded bridges, were rescued by the inland water police and diving service, said Hlathi.

Skhosana also visited several bridges in Mzinti, Tonga and Mlumati, to determine the extent of the damage caused by heavy rain and flooding in the area.

Mthethwa said the department was co-ordinating reconstruction of the damaged bridges and the matter had been discussed with sector departments.

In Limpopo, seven people were almost washed away in a bakkie in Zebediela, Polokwane, on Monday morning, ER24 spokeswoman Luyanda Majija said.

A group of men were also rescued by helicopter from rising water caused by the overflowing Mogol River in Vaalwater, Limpopo, over the weekend.

A 69-year-old woman, who was swept away with her husband while swimming in an undercover swimming pool at Klein Kariba at the weekend, was still missing on Tuesday.

The two were swimming on Friday when the Bela-Bela dam overflowed.

The SABC reported on Tuesday that the Vaal River was also expected to overflow.

Heavy rains had caused dams to release more water into the river.

Power failures hit parts of Tshwane in Gauteng earlier in the day, the city said.

This was due to cable faults caused by the heavy rain and power was expected to be restored by Wednesday.

The city urged people to switch off all non-essential appliances and to report any other power failures.

Also in Tshwane, a taxi carrying 13 passengers tried to cross a low-water bridge which was washed away by flood water in Mabopane, north of Pretoria on Monday.

"None of the passengers were injured and the taxi was recovered," Tshwane emergency services spokesman Johan Pieterse said.

In North West, Cosatu warned people living near low lying areas and water sources in the province to exercise caution and to relocate if possible.

Congress of SA Trade Unions provincial secretary Solly Phetoe urged people and government to provide assistance to those who were affected by the floods.

Continuing floods had also caused the closure of bush camps at the Kruger National Park.

SA National Parks spokesman Reynold Thakhuli on Tuesday said all gravel roads in the Marula region of the park were also closed due to the weather conditions.