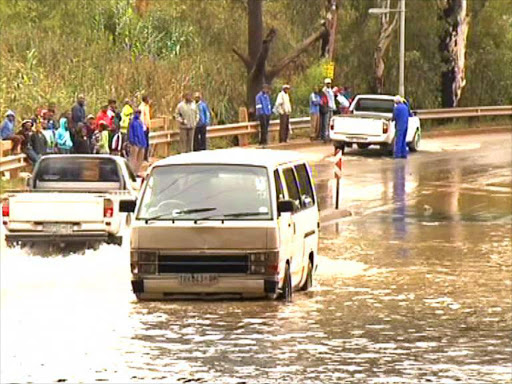 Four people were rescued after their vehicles were trapped in floodwater in Westdene on Wednesday, Johannesburg Emergency Management Services said.

The incident occurred when the Westdene dam overflowed after heavy rain, and water flooded Lewes Road in the suburb, he said.

Also on Wednesday, several roads in the Kruger National Park were closed due to flooding.

This was the result of heavy rain across the southern parts of the reserve, SA National Parks spokesman Reynold Thakhuli said.

Visitors were advised to avoid gravel roads and stay on the park's tarred roads.

The Crocodile Bridge Gate in the park was also closed due to flooding.

"Guests are advised to use the alternative route from Lower Sabie to access Crocodile Bridge Camp," said Thakhuli.

He urged people to avoid crossing low-level bridges in the park because of the dangerous flood water.

The Wolhuter Trail, Bushman Trail and the Sweni Trail were also closed due to heavy rain, and guests were advised to contact the park for changes to bookings.

"Guests are hereby notified that... travelling on a road that has been closed constitutes an offence, and such offenders can be fined," said Thakhuli.

A woman died and four other people were rescued after their cars were swept away by heavy floods on Tuesday in Brits, the North West provincial government said.

Thirty houses were flooded and two others had reportedly collapsed as a result of the flooding in Majakaneng, near Mooinooi.

Spokesman Lesiba Kgwele said the province's disaster management centre had been placed on high alert after the SA Weather Service forecast more heavy rain in the province over the next few days.

Emergency services had been placed on high alert, and water affairs in the province had opened sluice valves at the Hartbeespoort Dam, which was overflowing.

People who live downstream of the dam were urged to alert authorities to any threat of flooding.