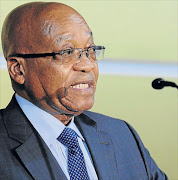 Amendments to two laws are set to change the face of print media, President Jacob Zuma said on Thursday.

Zuma said that while transformation was taking root in the broadcasting news arena, the print media sector was still lagging behind with respect to transformation.

"With regards to ownership, the print media is still dominated by the Big 4 - Caxton, Naspers, Independent News and Media SA, and the Times Media Group," Zuma said.

"The Print and Digital Media SA reported in 2011 that only an average of 14 percent of ownership of the mainstream print media is in black hands, and that women participation in board and senior management is limited to four percent."

Legislative reform was needed to change this picture.

"The amendments to the Broad-based Black Economic Empowerment Act should pave the way for transformation in the print media sector in the entire value chain, publishing, printing, distribution, advertising and Audit Bureau of Circulation [ABC] certification, " Zuma said.

"The amendments to the Employment Equity Act should also encourage the industry to diversify the newsrooms."

In the spirit of the theme of his 2014 state-of-the-nation address, Zuma said South Africa had a "good story to tell", and that the media needed to help tell these stories.

"We need a media sector that is an accurate mirror of ourselves regardless of race, colour, gender, class, creed or geographical location," he said.

"A media sector that will tell the full South African story, and balance the challenges we face of unemployment, inequality and poverty, with the remarkable achievements that the country has also scored."

Zuma said the sale of INMSA to the Sekunjalo Consortium was a step in the right direction.

"We are confident that the change in ownership will result in a more indigenous look and perspective in the content of the Independent media products nationwide."