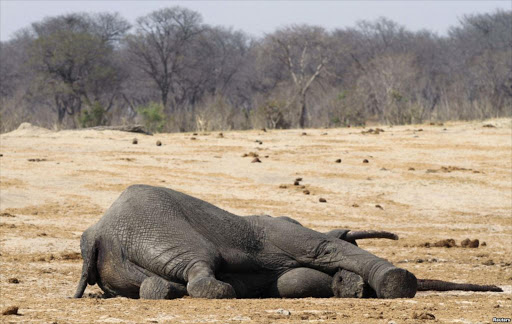 "Ten elephant carcasses were recovered in Hwange (national park) the day before yesterday (Sunday), two suspects were arrested and 14 pieces of ivory recovered," said Caroline Washaya-Moyo, spokesperson for the parks and wildlife authority.

Zimbabwean wildlife authorities said Tuesday they had discovered another 10 elephant carcasses, bringing the number of the animals poisoned by cyanide for their ivory to over 100 in the past month.

"Ten elephant carcasses were recovered in Hwange (national park) the day before yesterday (Sunday), two suspects were arrested and 14 pieces of ivory recovered," said Caroline Washaya-Moyo, spokesperson for the parks and wildlife authority.

In mid-September the park reported 81 elephants had been killed, and Washaya-Moyo said the discovery of the latest carcasses, and several others in between, brought the figure to over 100.

Twelve people have been arrested in recent weeks in connection with the killings, three of whom were sentenced in September to at least 15 years in prison each.

The magistrate also ordered them to pay $600,000 (440,000 euro) to the Zimbabwe Wildlife and Parks Authority for killing the animals by the end of the year.

Authorities have given villagers living around the park until the end of October to hand over any cyanide they might have or risk arrest.

Traditional leaders in Tsholotsho, a village bordering the park, pleaded with the authorities to pardon the villagers saying they were driven by poverty to kill the elephants and not by greed.

There are more than 120,000 elephants roaming Zimbabwe's national parks.

Elephant tusks and other body parts are prized in Asia and the Middle East for ornaments, as talismans, and for use in traditional medicine.

The international trade in ivory, with rare exceptions, has been outlawed since 1989 after the population of African elephants dropped from millions in the mid-20th century to just 600,000 by the end of the 1980s.

Wildlife expert estimate that the illegal international ivory trade is worth up to $10 billion a year.