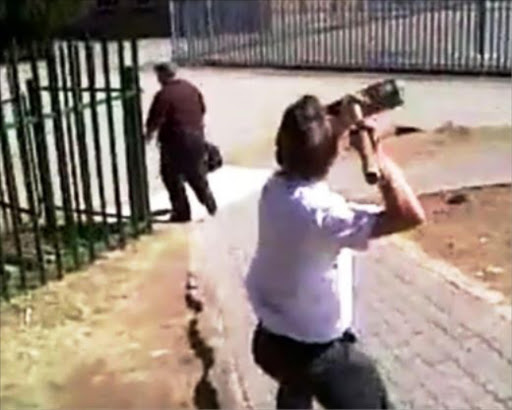 Footage from the video of a student assaulting his teacher. File photo

A pupil who took a video of a classmate assaulting a teacher at Glenvista High School was suspended on Tuesday, the school said.

The pupil would return to school on Tuesday for a disciplinary hearing, said school governing body (SGB) chairman Michael Etti.

"Thirteen other perpetrators were identified from the examination of the school surveillance cameras," he said.

They would be issued with suspension notices on either Wednesday or Thursday, and would face disciplinary hearings next Friday and the following Monday, he said.

Parents would be informed of the developments at a meeting which would probably be held on Wednesday.

The Gauteng education department welcomed the suspension, but distanced itself from the move.

"We cannot comment further because the matter is subject to a disciplinary hearing," said spokesman Gershwin Chuenyane.

"The SGB is responsible for learner discipline in terms of the SA School Act, and is therefore discharging its authority as the custodian of the school's code of conduct," he said.

The pupil was shown unsuccessfully trying to retrieve a school bag from the teacher, whom he then hit and kicked, before throwing a chair and a broom at him as the teacher walked out of the classroom.