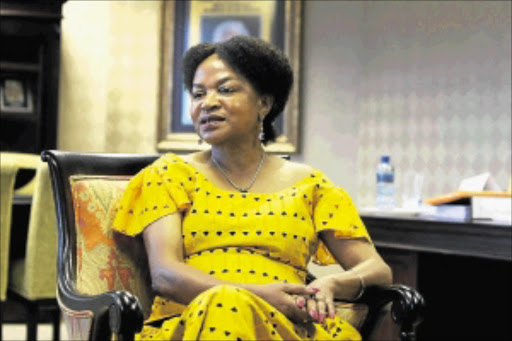 THE ANC supports the African Union's (AU's) decision of integrated continental economy - including a plan to dismantle borders of countries surrounding South Africa.

Yesterday ANC chairman Baleka Mbete, briefing the media on the the ruling party's position on foreign policy, said most African leaders sharply raised how the borders were making it difficult for people to move freely - hence there were many illegal people in South Africa.

She said it would also make it difficult to build an integrated economy if the borders remained untouched.

This was discussed during the recent AU meeting which was held in Addis Ababa where leaders adopted Vision 2063 for Africa.

"In Ethiopia, there was a positive spirit. We agreed that we did not fail in the past 50 years. We did decolonise the continent. Now we have to focus on building the economy when taking Africa to 2063.

"The issue of the borders came out sharply. Africans are tired of applying for visas. We need to enable our people to move freely in these countries, goods be moved freely. That's the future we are looking at," Mbete said.

Mbete said there were more Batswanas living in South Africa than in their own country while Basotho living near the borders were receiving social grants in South Africa.

"This is a reality. We do not want to take away the countries' sovereignty but we can't pretend that many Basotho or Batswana are not here illegally.

"We are still far from taking specific decisions, but economic integration is already on the agenda. There are a number of things that we cannot turn a blind eye on...," she said.

Mbete said the meeting agreed that Africans had to find a different approach to build the economy, hence the importance of ensuring violence end in the continent.

Lindiwe Zulu, who is ANC head of communication and special advisor to President Jacob Zuma on international relations, said there would be a summit with all Zimbabwean political parties in Maputo next month to discuss the road map ahead of the elections.

She hinted that the South African government might help financially, together with other SADC countries, since Zimbabwe has stated it did not have sufficient resources to hold the elections.