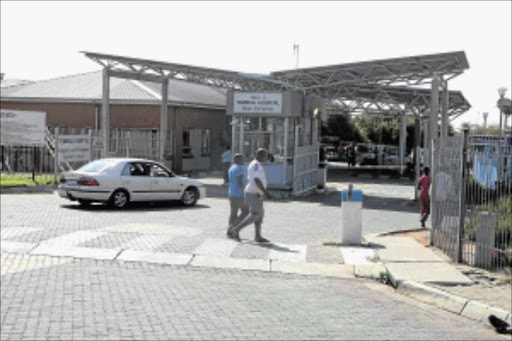 THE blame game over the cause of death of an unborn premature baby at Tembisa Hospital on the East Rand two weeks ago deepens because no postmortem was done.

The hospital has completed its preliminary investigation of the death of Nomvula Mokwape's baby and no wrongdoing has been found.

However, Sowetan has it on record that a sonar machine which would have confirmed 100% if the baby had been dead on arrival was not used.

Only a fetoscope, a vuvuzela-shaped type of stethoscope, was used.

Xoli Makabane, of Midwives in Private Practice in SA, said a fetoscope would normally be used to listen to the foetus's heart.

"If that fails, a cardiotocography, which is used to monitor the foetal heart rate as well as the contractions of the uterus, can be used. Sonar is the last option," Makabane said.

At the time of going to press, the Gauteng health department had not confirmed which method was used to determine that Mokwape's baby was dead.

The hospital's acting chief executive, Dr Doctor Msibi, promised to look at Mokwape's file today to see whether a sonar had been done.

Msibi also told Sowetan that a postmortem was not conducted on Mokwape's baby when it was delivered weighing 980g on April 10.

Mokwape, who was 26 weeks into her pregnancy when she gave birth, claimed that nurses did not inform her of what was happening to her baby during her one-night stay.

The hospital is adamant that Mokwape's child had already died before she arrived at the hospital, and that correct procedures were followed.

But Mokwape continues to dispute these claims.

Msibi said a postmortem was normally done at the request of a parent or if a case had been opened.

"There was no docket [with the police] opened in this matter. Secondly, the parent did not express that wish to staff," Msibi said.

Mokwape reaffirmed this week that after her baby was confirmed dead immediately after delivery, the nurses took the foetus away.

"They asked me if I wanted to bury the baby or not. I said I would and then they left me there with blood-soaked pyjamas," Mokwape said.

Msibi said they had called Mokwape to a meeting last week with nursing managers "to do a second redress". This was after Mokwape had expressed unhappiness with her treatment. Two weeks ago Sowetan reported that Mokwape claimed a senior nurse used her delivery to teach student nurses how to deal with emergency labour.

The hospital confirmed that student nurses were present during her labour. - sifilel@sowetan.co.za

At 26 weeks, foetus at risk

IF YOU give birth before 26 weeks into your pregnancy at a public hospital, chances are your baby will die.

Elgonda Bekker, vice chairwoman of the Society of Midwives of SA, told Sowetan that equipment used to care for newborn babies at public hospitals was not designed to accommodate smaller babies of less than 1kg.

"At the age of 26 weeks, the foetus is at transitional stage and can be considered to be a viable baby. Unfortunately, because of the challenges in the public health system, babies under 26 weeks old are considered to be at greater risk of not making it," Bekker said.

Bekker said labour wards were always under pressure due to the high number of deliveries.