Did Thatcher help or hinder apartheid 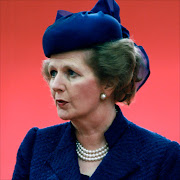 Nineteen years after the end of apartheid, South Africans are still passionately divided over whether Margaret Thatcher helped or hindered the cruel system of white rule and prolonged the incarceration of Nelson Mandela.

The heated discussions triggered by Thatcher's death show how influential South Africans believe she was on the fate of the last bastion of white-minority rule in Africa.

The former British leader supported the apartheid government when it was at its deadliest, killing many in the late 1980s in state terrorism at home and abroad in bombings and cross-border raids on neighboring states accused of harboring guerrilla fighters, said Pallo Jordan, a former Cabinet minister and stalwart of the governing African National Congress.

"Maggie Thatcher and Britain were important figures ... they were defending (apartheid) South Africa, they were preventing international sanctions," said Jordan to The Associated Press.

"Many lives were lost (as a result of the apartheid regime). I don't think it's a great loss to the world," Jordan said of Thatcher's death. She died after a stroke Monday at the age of 87.

Thatcher branded Mandela and his ANC movement "terrorist," amid concerns that they received backing from the former Soviet Union during the Cold War era and because of their guerrilla war for democracy.

Jordan was at Mandela's first meeting with Thatcher after his release from 27 years in jail, at Downing Street in London in 1990.

"What amused the old man (Mandela) more than anything else was that here she was engaging in a conversation with this man that she thought an arch-terrorist." He said Mandela's inherent charm disarmed "the Iron Lady," and the meeting passed without confrontation.

Thatcher's spokesman said in 1987 that anyone who thought the ANC, then the leading anti-apartheid movement in South Africa, would govern South Africa was "living in cloud cuckoo-land."

But others argue that Thatcher was strongly opposed to apartheid and racism and helped influence the white government to free Mandela.

"Thatcher did more to release Nelson Mandela out of prison than any of the other hundreds of anti-apartheid committees in Europe," Pik Botha, the last foreign minister of the apartheid regime, said Tuesday on Talk Radio 702 in Johannesburg.

F.W. de Klerk, the last apartheid-era president of South Africa, said in a statement that Thatcher, whom he called a friend, was "a steadfast critic of apartheid." He said she had a better grasp of the complexities and realities of South Africa than many of her contemporaries.

"She exerted more influence in what happened in South Africa than any other political leader," de Klerk said. He said Thatcher "correctly believed" that more could be achieved through constructive engagement with his government than international sanctions and isolation of the South African government.

Thatcher argued that sanctions were immoral because they would throw thousands of South African blacks out of work. Her stance allowed British companies to continue operating in apartheid South Africa, where the United Kingdom was the biggest trading partner and foreign investor.

Former Zambian President Kenneth Kaunda berated Thatcher bitterly at a 1986 Commonwealth conference where she refused to join six nations including Australia and Canada in imposing a package of sanctions against South Africa.

Kaunda told reporters Thatcher cut a "very pathetic picture indeed" and accused her of "worshipping gold, platinum and the rest" on offer from South Africa.

It was a far cry from his amused references to Thatcher as "my dancing partner" after the two famously waltzed at a 1979 Commonwealth summit of Britain and its former colonies in Livingstone, Zambia.

The rapport engendered there led Thatcher to help resolve the impasse in Rhodesia's 7-year war. With Australian negotiators, she persuaded the warring parties to sign a peace settlement that ended that country's white-minority rule and installed Robert Mugabe as leader of a democratic Zimbabwe in 1980.

Mugabe, now derided for destroying the economy of his country through violent and illegal grabs of white-owned farmlands, always enjoyed a collegial relationship with Thatcher. He said he admired her and that she was easier to deal with than her Labor Party successor, Tony Blair.

But Britain's government under Thatcher ignored the killings of an estimated 20,000 Zimbabwean civilians of the minority Ndebele tribe, prompted by an uprising of dissidents, that lasted from 1982 to 1987. Queen Elizabeth II even gave Mugabe a knighthood after the massacres. Donald Trelford, editor of The Observer newspaper in London, later charged that Thatcher and her Foreign Office were more concerned about their relations with Mugabe than with human rights.

Only after thousands of white farmers were driven off their land and more than a dozen killed did the queen strip Mugabe of his knighthood in 2008.

Thatcher finally was forced to impose sanctions against South Africa by following the lead of the U.S. Congress, which in 1986 passed the Comprehensive Anti-Apartheid Act, overriding Reagan's presidential veto after South Africa attacked Zimbabwe, Zambia and Botswana on the same day, recalled Pallo Jordan.

The official ANC statement on Thatcher's passing was surprisingly restrained, perhaps reflecting an African tradition of respect for the dead.

"She was one of the strong leaders in Britain and Europe, to an extent that some of her policies dominate discourse in the public service structures of the world," said ANC national spokesman Jackson Mthembu, referring to her view that the apartheid regime was a bulwark against communism. "Her passing signals the end of a generation of leaders that ruled during a very difficult period characterized by the dynamics of the Cold War."

'The ANC is a typical terrorist organisation ... Anyone who thinks it is going to run the government in South Africa is living in cloud-cuckoo land' - Margaret Thatcher, 1987