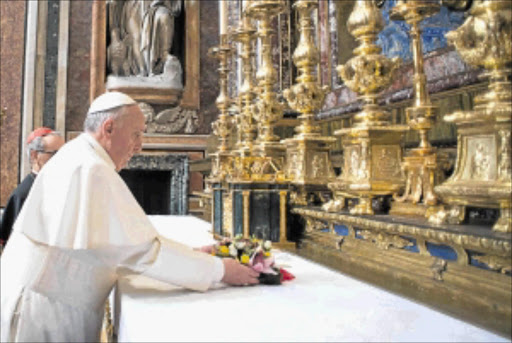 VATICAN CITY - Pope Francis, barely 12 hours after his election, quietly left the Vatican early yesterday to pray for guidance as he looks to usher a Roman Catholic Church mired in intrigue and scandal into a new age of simplicity and humility.

The Argentinian cardinal who has become the first pope born outside Europe in 1300 years, went to Rome's 5th century Basilica of Santa Maria Maggiore.

There he prayed before a famed icon of Mary, the mother of Jesus, which is known as the Salus Populi Romani, or Protectress of the Roman People.

"He spoke to us cordially, like a father," Father Ludovico Melo, a priest who prayed with the new pontiff, said.

"We were given 10 minutes' advance notice that the pope was coming."

The first leader of the church to come from the Americas, home to nearly half the world's 1.2-billion Catholics, Francis also takes the title of bishop of Rome.

In his first words to the crowd in St Peter's Square on Wednesday evening he made clear that he would take that part of his role seriously and made good on the promise by visiting one of the Italian capital's most important churches.

From there, he asked the driver to go to a Rome residence for priests so that he could pick up bags he left there before he moved to a guesthouse inside the Vatican for the electoral conclave - a wry reminder that he did not expect to become pope.

Late yesterday he was to go to the papal summer retreat at Castel Gandolfo, south of Rome, to meet Emeritus Pope Benedict, who last month became the first pontiff in 600 years to step down, saying that at 85 he was too frail to tackle all the problems of the Church.

Francis is, at 76, older than many other contenders for the papacy.

Cardinal Jorge Bergoglio's election has broken Europe's centuries-old grip on the papacy; he is also the first to take the name Francis, in honour of the 12th century Italian saint from Assisi who spurned wealth to pursue a life of poverty.

His elevation on the second day of a closed-door conclave of cardinals came as a surprise, with many Vatican watchers expecting a longer deliberation, and none predicting the conservative Argentinian would get the nod.

The 266th pontiff in the Church's 2000-year history, Francis is taking the helm at a time of great crisis.

Morale among the faithful has been hit by a widespread child sex abuse scandal and in-fighting in the Vatican bureaucracy, which many in the Church say needs radical reform.

When he appeared on the balcony of St Peter's Basilica, he looked as startled as anyone, hesitating a moment before stepping out to greet the huge crowds gathered in the square below to catch a glimpse of the new pontiff.

"I ask a favour of you ... pray for me," he urged the cheering crowds, telling them the 114 other cardinal-electors "went almost to the end of the world" to find a new leader.

The Vatican said his inaugural Mass would be held on Tuesday.