MaKhumalo opens up about her love for Zuma 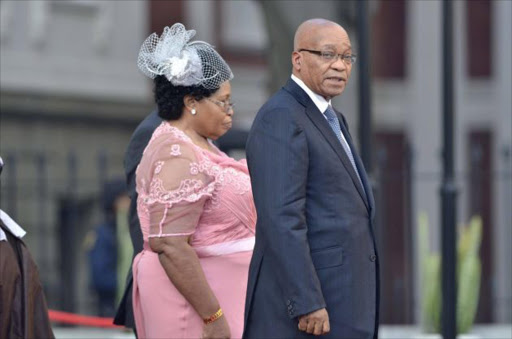 First LADY Sizakele MaKhumalo Zuma, who celebrated her 73rd birthday at the weekend, offered an insight into her marriage as she spoke of her love for President Jacob Zuma, their courtship and the difficulties she faced while he was in exile.

MaKhumalo had a surprise birthday party at a boutique hotel in Zimbali, north of Durban, on Saturday.

There was no high-profile businessman or politician in attendance, only family, friends, gospel artists and religious women.

Even President Zuma did not attend, but he sent his apology with his younger sister, Sibongile Zuma, saying he had work commitments.

MaKhumalo is the president's first wife, whom he married in 1973. They have no children.

Two years after they wed, Zuma went into exile in Swaziland, Mozambique and later Zambia. He returned after the unbanning of the ANC in 1990.

Usually a shy and reserved woman, MaKhumalo broke her silence about the pain she went through as a Zulu woman in rural Nkandla when Zuma was in exile.

"I was alone. I was called names by some within the family because he had left me at home.

"Even some men in the area started making moves on me, saying he was not coming back and was dead somewhere, but I waited. I told everyone that until I saw his grave or his remains, I would wait," she said.

"I loved him and will always love him. That is why I persevered for all the years he was away.

"I did not listen to all the gossip about him; that's what true love does to you. Today, I have no regret."

"She is the one who kept the family together during trying times and she still does. When my brother was in exile, she remained grounded and did not leave, like most women would have done," Sibongile said.

The president's wife also spoke out against rape of the elderly, saying that, as a pensioner herself, she did not feel safe.

"I never imagined that I would live to see the day when such a horrible thing could happen.

"Grannies are supposed to be loved but instead they are abused . raped by the very people who should be protecting them. I cannot begin to imagine the pain a pensioner such as myself goes through when attacked," MaKhumalo said.

She said granny-rapists should be locked up for good.

"They must be sentenced harshly. Any rape should be punished but I think a heavier sentence should be imposed on those who rape the elderly.

"They must be sentenced to life without the possibility of parole. Government should send a strong message that rape cannot be tolerated."