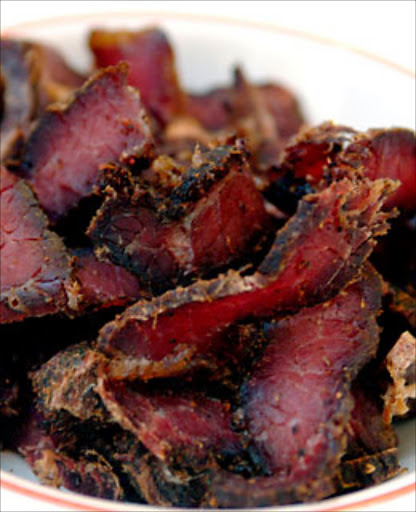 Most of South Africa's biltong - dried strips of cured meat and a much loved snack -- has little to do with the ingredients on the label, according to DNA tests results published Friday.

Game biltong which is popular with the health conscious, as it is considered lean and free-range, is the most mislabelled, according the study by scientists from the University of the Western Cape.

"The finding was that there is a major substitution of species in the market," said researcher Maria Eugenia D'Amato.

Of the 146 samples tested over 100 contained undeclared meat species. All the samples marked beef were correctly labelled, but for the most badly labelled case 92 percent of packets of kudu biltong contained different species such as horse, giraffe, pork beef and even kangaroo.

Researchers were concerned that one sample labelled zebra, contained meat from a mountain zebra, a specie threatened with extinction.

"Some of the substitutions are intentional because kangaroo does not occur in South Africa and it must have been imported," D'Amato told AFP.

"Also finding pork in ostrich sausage, that is intentional, there is no way that is going to be a mistake," she said pointing that such actions infringed on some people's religious beliefs such as Jewish and Muslims who do not eat pork

The study, published in the European scientific journal BioMed Central, was conducted between 2009 and last year.

It is the first of its nature in South Africa and entirely unlinked to the horse meat scandal that has riveted Europe.

Game meat biltong is mega business in South Africa where over 10,000 wildlife farms are listed.

The meat is seen as healthier than beef because it is leaner, contains low cholesterol and no hormones or antibiotics that get injected into domestic farm animals.

South Africa authorities on Thursday said they had launched an "urgent" investigation into how unlabelled donkey, water buffalo and goat meat got into products sold in supermarkets, following findings of a separate study.

The government requested the probe after reports had created "alarm and panic" after irregular ingredients were revealed in a Stellenbosch University study.

In that study, up to 68 percent of 139 meat samples from shops and butcheries had irregular ingredients, with pork and chicken most often substituted for other meat.

Europe has been battling its own food drama after horsemeat was found in so-called beef ready-made meals and burgers in several countries.