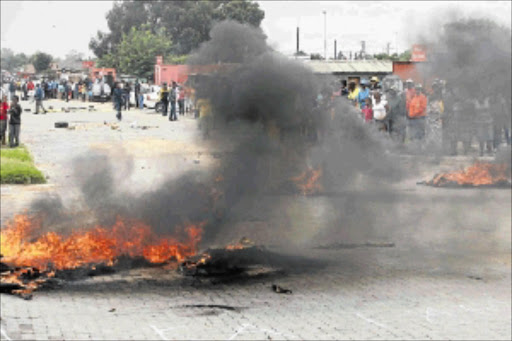 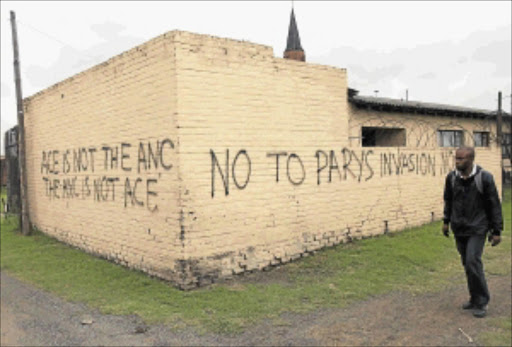 Burning tyres, barricaded roads and looting was how residents of Zamdela township near Sasolburg in the Free State voiced their anger at the proposed merger of their Metsimaholo municipality with Ngwathe municipality in Parys.

Residents blamed Free State Premier Ace Magashule, who is from Parys, for the impending merger.

After a heated public meeting at Zamdela Stadium yesterday - where they had gathered to craft a plan to thwart the merger - residents went on the rampage.

In acts reminiscent of Khutsong (the West Rand township where residents violently protested its transfer from Gauteng to North West in 2006), they barricaded streets with burning tyres and threw bottles and rubbish on the main roads leading in and out of the township.

They were angered because the regional council did not show up at the meeting where the proposed demarcation issue was overwhelmingly rejected.

They threatened that another Khutsong episode would play itself out in Zamdela if Magashule did not change his mind.

Metsimaholo residents said the move would drain its coffers and impact negatively on service delivery.

Seabe Maboe, deputy chairman of the Zamdela Community Concerned Residents, said the community wanted to be consulted properly on the move.

"Ngwathe municipality currently owes Eskom R116-million. The merger will mean that we will inherit that debt, which means our municipality will collapse. Service delivery in Ngwathe is very poor," he said.

He said the Municipal Demarcation Board was supposed to have notified them about the intended merging of the two municipalities in writing before December 10.

"On January 10 we submitted our objections. We have received confirmation from the board that it has received our objection. We will now embark on a process of public engagement and protests to oppose the move.

"We have studied what happened in Khutsong, which led to people boycotting elections. If Magashule does not listen to us, we will see another Khutsong here," Maboe said.

During their rampage, protesters trashed shops in Sasolburg. At least one jewellery chain store and one clothing chain store were broken into and looted.

Police intervened and a total of 87 people were arrested, Sapa reported.

The protesters accused Magashule of imposing anarchy by employing people from Parys to run the Metsimaholo municipality.

They said the majority of the regional executive council were from Metsimaholo.

A resident who did not want to be named said the provincial government was playing games with them because it was already moving Sasolburg's social development offices to Parys from March 1.

Metsimaholo executive mayor Brutus Mahlaku said the proposed demarcation was in accordance with the processes of the demarcation board. He said the council would be involved in the entire process.