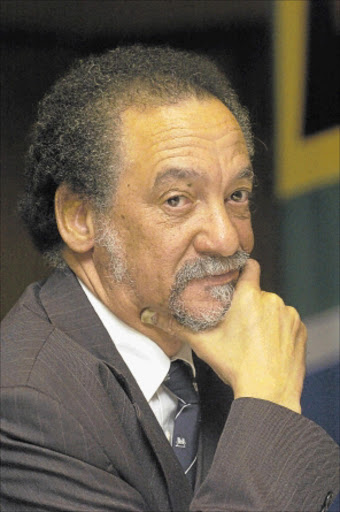 Professor Jakes Gerwel died in the early hours of Wednesday morning at the Kuilsriver Hospital, his family said.

The 66-year-old professor was reported to be in a critical condition on Tuesday after he underwent heart surgery.

“The Gerwel family would like their privacy to be respected for the next couple of days. Funeral arrangements will be made known soon,” said family spokeswoman, Pam Barron, in a statement.

Gerwel was a well-known figure in South Africa’s political history and in his later years, he chaired and was on the board of major organisations and corporations.

He grew up on a sheep farm and little did he know that one day he would become the right-hand man of South Africa’s first democratic president.

Gerwel — an academic, executive and multi-award winner — served as director-general in the office of former president Nelson Mandela.

He was born on January 18, 1946 in the Eastern Cape town of Somerset East and matriculated from Paterson High School in Port Elizabeth.

In 1967, Gerwel graduated from the University of the Western Cape with a Bachelor of Arts degree and completed his honours a year later.

In the late 1960s Gerwel became involved in the Black Conciousness Movement, led by Steve Biko. He became an educational advisor to the South African Students’ Organisation (Saso) in the early 1970s.

For a short while, Gerwel lectured at the Hewat Teachers’ Training College in Cape Town and in 1971, he received a government scholarship to study at the University of Brussels.

Here he completed a licentiate [academic degree] in Germanic Philosophy and a literature doctorate.

When he returned to South Africa, he took up a teaching post at Grassy Park High School in Cape Town.

He later moved to the University of the Western Cape and became a lecturer.

In 1980, Gerwell was appointed a professor and just two years later a Dean of the Arts Faculty.

He was appointed vice-chancellor of the university five years later.

During the 1980 education protests, Gerwel was detained by police.

Nine years later, he and Archbishop Emeritus Desmond Tutu, together with fellow teacher Franklin Sonn, were arrested during a march in Cape Town.

In 1991, Gerwel was elected a member of the ANC’s Western Cape regional committee.

The University of the Western Cape on its website, said Gerwel saw an “unambiguous alignment with the mass democratic movement and a new edge to the academic project”.

It said that under the banner of “an intellectual home of the left”, space was created for curriculum renewal and for innovative research and outreach projects.

“Important social and policy issues, which had been swept under the carpet by the government of the day, thus received attention,” the university said.

In 1994, Gerwel was appointed to the post of director general in the office the Mandela presidency.

In a series of interviews with writer and researcher Padraig O’Malley, published on the Nelson Mandela Centre for Memory website, Gerwel talked of the crucial years preceding South Africa’s transition to democracy.

He also recalled the tough negotiations at the Convention for a Democratic South Africa, and the first years after the election of Mandela as the country’s first democratically elected president.

“So really one doesn’t need to be very profound actually to make the statement that what has changed fundamentally in SA is that it has got a democratic government; SA has a government, has got a polity in which all of its people and all it’s political tendencies hold together.”

During his own time in government, he named crime and unemployment as two areas of concern.

“So one would have wished that the combination of social factors and capacity for law enforcement was such that the crime situation was less critical than it is,” he told O’Malley.

His awards include the Order of Southern Cross from Mandela, the Order of Good Deeds from Libya and Freedom of the Town from Somerset East.

He served as chairman for Media24, the Allan Gray Orbis Foundation, and chairman of the board of trustees for the Nelson Mandela Centre of Memory.

He has also been a chairman of SAA and a chancellor of Rhodes of University.

A rugby and cricket lover, Gerwel was the chairman of the policy committee of the 2003 cricket World Cup.

He was married to Phoebe Abrahams and they had two children - a daughter Jessie, a son Heinrich, and four grandchildren.