Tribute to Muofhe: hero of resistance 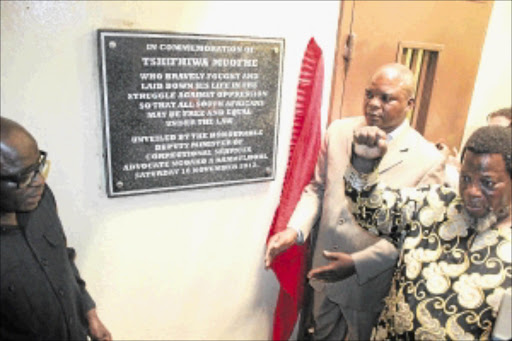 AT the weekend Judge Tshifhiwa Maumela of the North Gauteng High Court spoke of the cruel conditions at Matatshe Prison when he and struggle icon Tshifhiwa Muofhe were detained by the former Venda police in 1981.

Speaking at the unveiling of a plaque outside the cell in which Muofhe died at the hands of the police, Maumela said detainees would be dumped into small cells and left there.

"No Bibles or hymn books were allowed," Maumela said.

He said detainees hated the clicking sound of keys.

"When you heard the clicking you knew they were coming for one of you and the chances were you might not come back."

Deputy Minister of Correctional Services Ngoako Ramatlhodi on Saturday unveiled a plaque in honour of the late activist, with these words: "In honour of Tshifhiwa Muofhe who bravely fought and laid down his life in the struggle against oppression so that all South Africans may be free and be equal before the law".

Ramatlhodi, with pastors and members of the Muofhe family, laid a wreath at Medium B centre, cell No2, where Muofhe died.

"We are marking the site where one of our heroes died and, through this, showing that our freedom was not achieved for free and many people laid down their lives for it."

Ramatlhodi later addressed a memorial lecture in memory of Muofhe at the Charis Church in Makwarela, sharing the stage with Muofhe's long-time friend, Tshenuwani Farisani of the Lutheran Church.

In a tribute to the slain activist more than 20 motorbike riders drove through Thohoyandou, retracing Muofhe's steps from his home, to the notorious torture centre in Sibasa, to the police station where he died, to the Beuster mission and finally to the cemetery where he was buried.