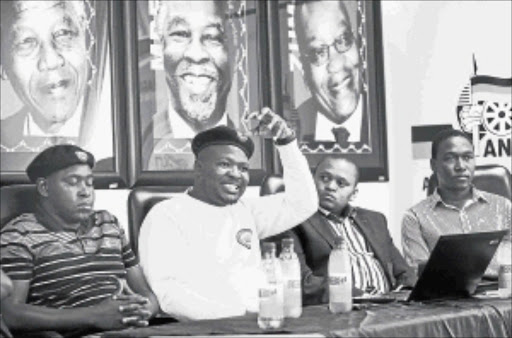 THE ANC Youth League in Eastern Cape yesterday became the first structure to publicly snub President Jacob Zuma and nominate his deputy Kgalema Motlanthe - who it believes has a "high moral authority" for the party's top position.

The league's secretary Mziwonke Ndabeni said a decision to endorse Motlanthe ahead of the ANC's elective conference in Mangaung in December was taken after its provincial executive committee observed a number of "leadership deficiencies" in the party and in government.

"We agreed on a principle of change ... and resolved to campaign for a leadership which has a high moral authority and an advanced theoretical and ideological clarity.

"Our moral and political standing in society is crumbling under the current leadership. Our people are left leaderless," he said.

Ndabeni was quick to add that the decision not to support Zuma was "not driven by personal hatred but was driven by an urgent need to fill the void in the leadership that we currently experience in South Africa".

The league has been gunning for Zuma's removal, with Ndabeni going as far as highlighting a dwindling presence and influence in international affairs as one of the reasons it wants a change in leadership.

One of Zuma's critics, suspended ANCYL president Julius Malema, has suggested that Zuma has abandoned the African agenda - which Thabo Mbeki gained worldwide respect through championing for it.

The youth leaders charged that the leadership that emerged in Polokwane was "plunging our organisation into a state of paralysis and entrenching tribalism and fracturing society into toxic tribal lines".

The league also wants Rural Development Minister Gugile Nkwinti - who lost his position as chairman in the Sarah Baartman region - to be in the ruling party's national executive committee (NEC).

After a marathon NEC meeting that overlapped for an extra six hours as officials fought about numbers, Mantashe revealed a rather dwindling membership in Eastern Cape and a sharp increase of ANC members in Zuma's home province and stronghold ofKwaZulu-Natal.

The final number of delegates per province to make up the 4500 delegates in Mangaung will be announced today.