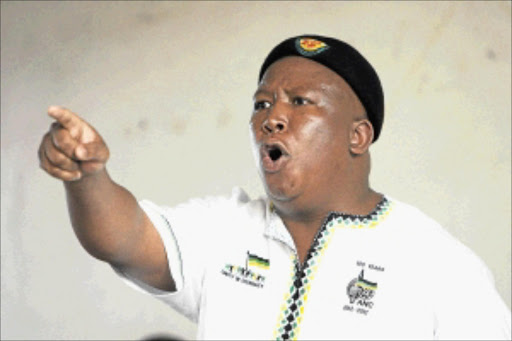 How come he can go straight to the front of the queue?

WHY is former ANC Youth League president Julius Malema still receiving special treatment when he has become an ordinary person?

This question was asked by the DA in Limpopo and several voters at a by-election in Polokwane yesterday.

Resentment was evident when an ultra-confident Malema arrived to cast his vote at the local Mponegele Primary School in Seshego Zone 1 and went to the front of the queue.

The by-election follows the death of ANC councillor Alinah Malimati early this year.

After casting his vote, Malema told the media that no one was pushing him or supporting him in his series of public addresses to churches, dissident ANC members and supporters, and disgruntled mineworkers and soldiers.

As if refuting allegations that he was receiving special treatment, Malema said: "I'm lucky because there are few people [casting their votes] in the queue".

One of the anti-Malema group members, Boy Mamabolo, confronted Malema - in the presence of his bodyguards and police officers - and charged that he must join the queue like anyone else.

DA legislature member Desiree van der Walt said afterwards: "I think people who should be given special treatment are pensioners, the disabled and sickly. But, Malema was treated like a king".