Popcru wants SA anthem changed, also calls for the scrapping of a section of Police Act 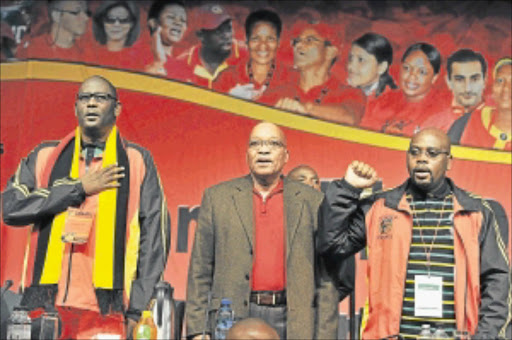 POLICE and Prisons Civil Rights Union wants the original Nkosi Sikelel' iAfrika to be the national anthem and the Die Stem version dropped.

Popcru's proposal will be debated by more than 3,000 delegates attending the Congress of South African Trade Unions (Cosatu) national congress in Midrand.

In its proposed resolution, Popcru argues that the two versions of Afrikaans and English were included as a compromise position through the Convention for a Democratic South Africa (Codesa) processes.

"The current national anthem was a compromise out of the deliberations of Codesa between 1992 and 1993 during the political engagement which led to the new Constitution.

"The combination with Die Stem is the direct opposite of what Nkosi Sikelel' iAfrika entails or what it means to the Africans," reads the statement.

"The original Nkosi Sikelel' iAfrika must be the only South African national anthem, as composed by Enoch Sontonga."

Nkosi Sikelel' iAfrika was largely su ng by blacks during the apartheid era, while the white state regarded Die Stem as their official national anthem.

Nkosi Sikelel' iAfrika is also sung in Zimbabwe and Zambia.

As a sign of unity, the first democratic government, led by former president Nelson Mandela, combined the two anthems to symbolise the rainbow nation.

But many people, particularly black South Africans, were unhappy with the combination.

Popcru has also proposed that a section of the Police Act of 1995, which prohibits police from holding political office, should be scrapped.