You are leaderless, so lead yourselves - Juju tells miners 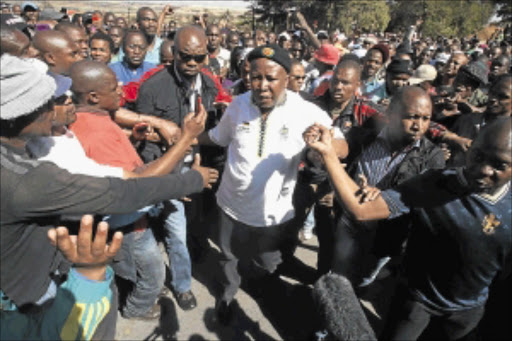 IDOLISED: Julius Malema speaks to mine workers at Gold Fields mine in Carletonville in the West Rand. PHOTO: ANTONIO MUCHAVE

Malema warned them against "criminals and thieves" in the NUM who "work in cahoots with management to steal their money".

EXPELLED ANCYL leader Julius Malema was escorted by thousands of chanting workers inside the Gold Fields mine near Carletonville, despite management's instruction to security officers not to allow "outsiders" in.

The miners are on an illegal strike after the National Union of Mineworkers (NUM) leadership committed them to a funeral scheme, and management started deducting R69 from their salaries last month, allegedly without consulting workers.

Workers allege they were told the scheme would cost R39.

Malema warned them against "criminals and thieves" in the NUM who "work in cahoots with management to steal their money".

He told workers they were leaderless and should lead themselves.

"NUM leaders have turned against their members. NUM has been hijacked, and if you want to strike they tell you about Mangaung."

He said the ruling party was also unwilling to change workers' conditions because some party leaders had interests in mines and were greedy.

"Leaders of the ANC are shareholders in mines. The ANC national chairperson, Baleka Mbete, is a majority shareholder here," said Malema.

He said businessman Patrice Motsepe became a billionaire in 20 years because he did not share some of the profit with workers.

NUM national spokesman Lesiba Seshoka said it was untrue that workers were not consulted about the funeral scheme. "There is a collective agreement on the matter," he said.

Mine spokesman Sven Lunsche said the matter was between NUM and its members but that Gold Fields was trying to resolve it. - mabuzak@sowetan.co.za