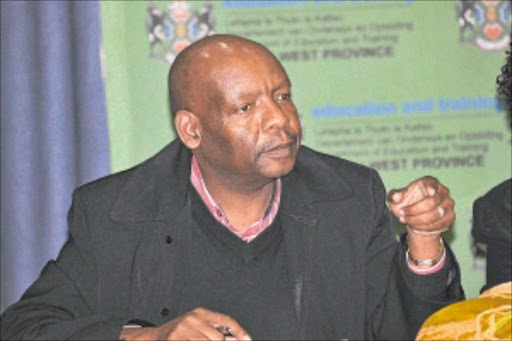 THE North West education official who allegedly irregularly appointed and later promoted his wife has been suspended pending an investigation into nepotism.

Abe Seakamela, acting superintendent-general in the department , was served with the precautionary suspension letter on Thursday at his home while on sick leave, the department said.

The allegations included that Mogotsi-Seakamela's salary ballooned to R454356 from the R92190 she earned as a teacher since she was appointed, apparently by Seakamela, first as a deputy chief education specialist and later as his personal assistant in 2005.

Sowetan has seen a report of a probe into the department's human resources division commissioned by former MEC Raymond Elisha.

The report states that "there are numerous adjustments to her [Mogotsi-Seakamela] salary which were extraordinary", but concedes that "the unavailability of documents imposes limitations on the investigation".

Seakamela dismissed the allegations as "a witch-hunt".

"All matters relating to salary adjustments and other remuneration were in accordance with the prescripts of the law," he said.

Seakamela further said Mogotsi-Seakamela applied, was shortlisted, interviewed and appointed in the position of deputy chief education specialist and later that of his personal assistant.

He also said that they were not married when she was appointed in these positions.

He said when they married in January 2009 he immediately informed his supervisor.

Seakamela said: "Since the matter was investigated internally in 2005 and externally by the then MEC [Johannes Tselapedi] for education, the external investigation report was submitted to the office of the public protector, who laid the matter to rest."

Sowetan has learnt that Seakamela moved his wife to another directorate after the newspaper's report.

MEC for education Louisa Mabe said on Friday: "Instead of giving me the opportunity to deal with the matter, he [Seakamela] then transferred his wife to another position that would further benefit her and this was done without my approval.

"I was forced to reverse the decision."

Early last week, the department served Seakamela with a letter requesting that he give reasons within 48 hours why he should not be suspended.

Seakamela instead submitted a letter from his psychiatrist, department spokes-woman Bayanda Zenzile said, and the notice of suspension was then served.