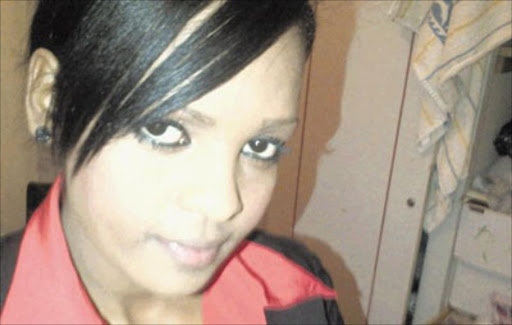 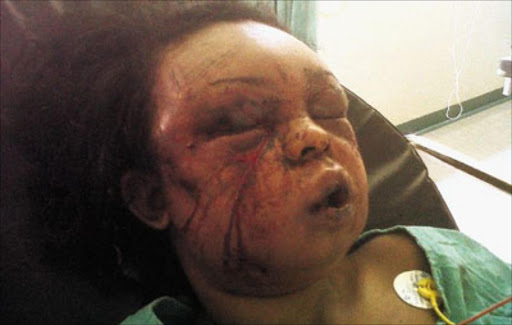 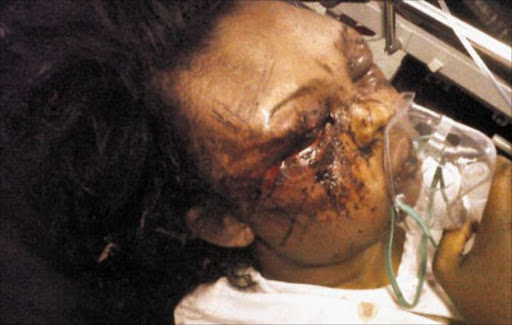 THIS beautiful woman, a 21-year-old mother, was brutally and mercilessly beaten, allegedly by her ex-boyfriend, despite having a protection order against him and two domestic violence cases pending.

Michael Padayachee was out on R5,000 bail on a June intimidation charge brought by Tina Mbili, the mother of his child and his high-school sweetheart, when he allegedly kicked and punched her in the head and face a week ago in Verulam, north of Durban.

He allegedly attacked her as the police were supposedly looking for him in connection with the attempted murder of his 17-month-old daughter, who was badly bruised when he allegedly threw her over a gate in July.

The attack left Mbili with severe head and facial injuries and fighting for her life in an ICU hospital bed.

He broke up with her when she was pregnant, but allegedly ignored her pleas that he stay away from her.

Horrified by the young hospital clerk’s head injuries, Mbili’s sister, Ross Harichand, yesterday accused the police and the justice system of failing her sister and her family.

“She had a protection order but still he managed to get to her, even when the police were supposed to have been looking for him. If they had taken the domestic violence cases seriously my beautiful sister would not be fighting for her life,” said Harichand.

Harichand — who had laid a domestic violence charge against Padayachee in 2007 after he allegedly broke windows at the family home and threatened to kill them — said she could not understand why the police failed to arrest him in July when Mbili was allegedly attacked in front of several neighbours.

“The police had witnesses. They even took statements. ‘They say they couldn’t find him. Are they even looking for him?” she asked.

Before Mbili was put into a medically induced coma on Sunday, she told her family that she was walking with her daughter in a park when she was attacked.

Harichand said a passing motorist had found her sister lying next to the road. She had crawled from where she was attacked to get help.

The child, her bank cards, cellphone and money were taken.

“I received a telephone call saying that I need to rush to the hospital. I was shocked when I got there. I didn’’t recognise my sister. I started to cry because I could not imagine what my sister was going through,” Harichand said.

She established that the baby was with Padayachee’s mother and managed to get her back.

“The child keeps saying ‘Tina is dead’. Why would she say that unless someone told her that. My sister was left for dead.”

Harichand said Mbili was convinced that the protection order would save her.

“I knew from the beginning, when she was in Standard 7, that this relationship was abusive. But she did not leave him.

“The protection order meant nothing to him or to the police, who should have enforced it,” she said.

Police Ministry spokesman Zweli Mnisi said that Mbili’s family should go to court to complain that the protection order had been violated.

“The court issued the protection order, therefore victims should go to court and asked for them to instruct the police to arrest the suspect and the police will then definitely make the arrest.”

KwaZulu-Natal police spokesman Captain Thulani Zwane said that another attempted murder and robbery docket had been opened citing Padayachee but an arrest had not been made .

He said Padayachee was wanted in connection with the attempted murder of his daughter and police had been looking for him since July.

“These men know that even if they get arrested they will get bail. We need stiffer sentences. We still have a long way to go.”