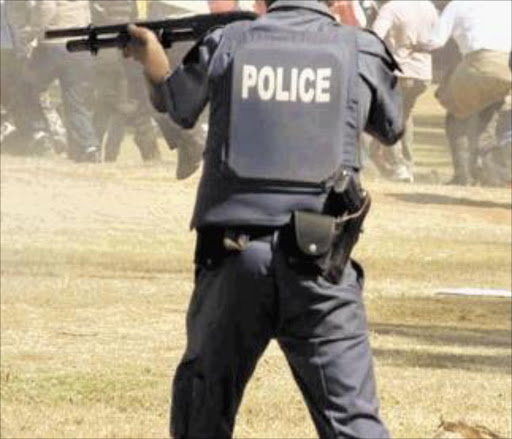 South African police opened fire on Thursday against thousands of striking miners armed with machetes and sticks at Lonmin's Marikana platinum mine, leaving several bloodied corpses lying on the ground.

A Reuters cameraman said he saw at least seven bodies after the shooting, which occurred when police laying out barricades of barbed wire were outflanked by some of an estimated 3,000 miners massed on a rocky outcrop near the mine, 100 km (60 miles) northwest of Johannesburg.

Police officers said talks with leaders of the radical Association of Mineworkers and Construction Union (AMCU) had broken down, leaving no option but to disperse them by force.

Ten people, including two policemen, have died in nearly a week of fighting between rival worker factions at the mine, the latest platinum plant to be hit by fallout from an eight-month union turf war in the world's main producer of the precious metal.

On Wednesday, up to 3,000 police officers, including members of an elite, camouflage-wearing riot control unit backed by helicopters and horses, confronted the striking rock-drill operators, but there were no clashes.

Before the police advance, Joseph Mathunjwa, president of AMCU, which has been on a big recruitment push in South Africa's platinum mines, said there would be bloodshed if police moved in.

"We're going nowhere," he shouted through a loudhailer, to cheers from the crowd. "If need be, we're prepared to die here."

The unrest has forced Marikana's London-headquartered owner to halt production at all its South African operations, which account for 12 percent of global platinum output.

Lonmin said it had lost the equivalent of 15,000 ounces of platinum from the six-day disruption, and was unlikely to meet its full-year production target of 750,000 ounces.

Its London-listed shares were down more than 6 percent on Thursday, bringing total losses since the violence began to more than 13 percent.

The Marikana strikers have not made their demands explicit, although much of the bad blood stems from a turf war between AMCU and the National Union of Mineworkers (NUM), the dominant union for the last two decades.

At least three people were killed in a similar round of fighting in January that led to a six-week closure of the world's largest platinum mine, run by Impala Platinum. That helped push the platinum price up 15 percent.

South Africa is home to 80 percent of the world's known platinum reserves, but rising power and labour costs and a sharp drop in the price of the precious metal this year have left many mines struggling to keep their heads above water.