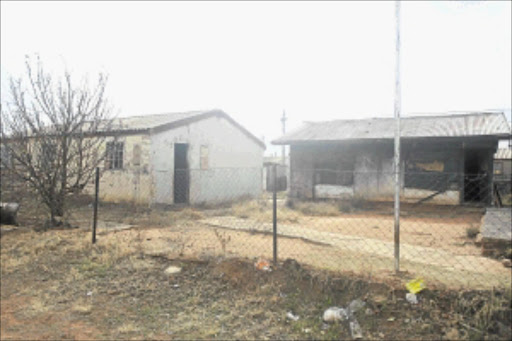 GRIM REMINDER: A house in Brandfort where ANC veteran Winnie Madikizela-Mandela stayed after she was banished to the Free State in 1977. PHOTO: MABUTI KALI

THE Free State government has failed to fulfil its promise of converting ANC veteran Winnie Madikizela-Mandela's old house in Brandfort into a museum.

The provincial government announced in August last year that it would convert the house into a museum to honour her as part of the ANC's centenary celebrations.

Madikizela-Mandela had lived in the house for many years while banished to Brandfort by the apartheid government.

The project was supposed to have been launched during Women's Month last August.

Construction work was expected to have been completed early this year.

However, when Sowetan visited last week, the house was still in its old state.

The kitchen door and windows were broken with only the SA national flag flying at the entrance.

Weeds had grown near the house and the gate to the structure was missing.

Neighbours fear that the house could be used by criminals as their "hideout". People were seen walking in and out of the yard.

Free State sport, arts and culture spokesman Tankiso Zola last year said that the department was facilitating the establishment of the museum.

The department, he said, had set aside R3-million for the project.

Madikizela-Mandela lived in the house with her youngest daughter, Zindzi, with no running water or electricity, after she was banished to the area in 1977.

Madikizela-Mandela's former house was expected to draw tourists to the sleepy town of Brandfort because they would want to see where the ANC veteran was exiled to during the apartheid era.

One of the residents, Betty France, 73, said the state must build the museum "as soon as possible".

"This house is unoccupied and criminals could take advantage of that and use it as their hideout.

"One day a corpse will be discovered here because crime is rife in this area," France said.

She called on the government to honour Madikizela-Mandela.

William Khothatso, 47, said: "She played a big role in the struggle against apartheid. She is a heroine to many in this area.

"We love her a lot and she deserves to be treated with dignity."

Khothatso occupies the house next to the one in which Madikizela-Mandela was kept. He said he had relocated after noticing that the house was not occupied.

Elizabeth Jonas, 75, who lived in the house after Madikizela-Mandela returned to Gauteng, has been given a three-bedroomed, furnished house by the Free State government.

Free State provincial spokesman Wisani Ngobeni said they had not abandoned the project.

"We have not failed. The project is in the design stage," Ngobeni said.

"When building a museum, it is good to follow necessary processes.

"First we had to move out the occupants of that house and provided them with alternative accommodation," he said.

"We want to restore the house to its original state and it is going to be one of our tourist destinations in the province."

He said after completing the design stage, they would then appoint a construction company to start building. - ntwagaes@sowetan.co.za