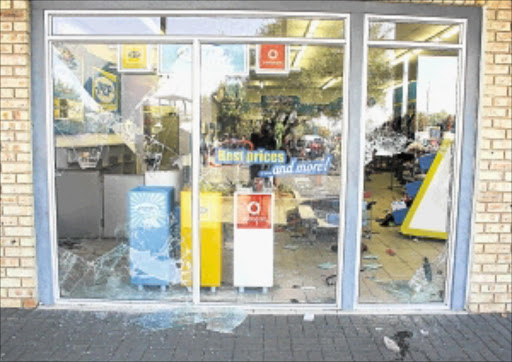 SHATTERED: A broken window and strewn debris are evidence of a violent service delivery protest in Zandspruit near Honeydew yesterday where residents vandalised a Pep store. PHOTO: SIBUSISO MSIBI

TENSIONS boiled over in Zandspruit near Honeydew this week when a man was shot in the chest following the service delivery protest.

Police spokesman Colonel Lungelo Dlamini said the incident took place inside the informal settlement in the early hours when the residents fought among themselves.

Dlamini said the incident was a result of fighting between South Africans and foreign nationals living in the informal settlement.

"The man was seriously injured and is being treated at Helen Joseph Hospital (in Joburg)," he said.

No suspects have been identified in the shooting and the identity of the man is still unknown.

Following the protest on Wednesday, shops in the Zandspruit Value Centre were looted by locals.

A retail store was broken into and various items were stolen, which included computers, television sets, blankets, clothes and cellphones.

The owner of the bottle store, Reon de Reuck, said the shop had been broken into 23 times since opening five years ago.

"I'm Afrikaans, I am not going anywhere," he said.

The Zandspruit residents were protesting on Wednesday over service delivery. Beyers Naudé Drive was blocked off and tyres were burnt on the streets.

However, the situation had stabilised yesterday while police maintained heavy presence, ready to tackle sporadic upsurges which were the order of the day.

Johannesburg Roads Agency workers were at hand to clear the streets of the remains of the protest.

Residents yesterday vowed to continue with the protests "until our demands are met".

"We don't need this bridge or the taxi rank. We need houses, that's what we need. We can't sleep in the taxi rank," said an angry community member.