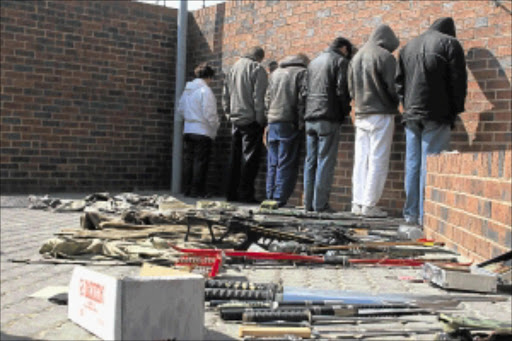 The suspects are alleged to have assaulted Sibusiso Titimani, 15, who died in hospital

A WOMAN out on bail broke down and cried in the Germiston Magistrate's Court yesterday as she watched her co-accused being led away to the holding cells.

All the suspects are believed to be related.

They were all initially charged with unlawful possession of firearms and ammunition. However, the men had a more serious charge of murder added yesterday.

They were arrested at a house in Primrose East.

Numerous weapons including guns, knives and metre-long swords were recovered.

A swastika, normally associated with rightwing organisations such as the AWB and the Nazis, was also recovered.

Police spokeswoman Captain Pinky Tsinyane said their arrest followed months of investigation after cases of assault were reported in the area.

The suspects are alleged to have assaulted Sibusiso Titimani, 15, who died days later at Boksburg Hospital.

Titimani's friend, who was with him, managed to escape. He is expected to attend the identity parade and identify the suspects.

The deceased was allegedly near a mine dump with his friend when they saw three white males who chased them.

Titimani allegedly fell down and was assaulted.

The case was postponed to June 11.