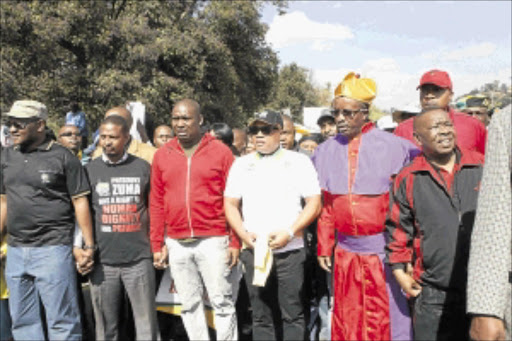 COSATU president Sdumo Dlamini has lashed out at liberals saying they were using "spooks" like former president FW de Klerk to undermine the ANC leadership.

Speaking outside the Goodman Gallery in Johannesburg yesterday, Dlamini said: "It's clear; there is an agenda at play to undermine the ruling party with spooks like FW de Klerk."

He said spooks should remain in their graves where they were buried.

"If they are in their graves, they must remain in their graves and not be ghosts that walk in daylight," he said to loud cheers from thousands of people who had marched to the gallery to voice their disapproval of Brett Murray's painting.

De Klerk offended many recently when he defended the apartheid system during an interview with foreign broadcaster CNN.

Yesterday De Klerk's spokesman Dave Steward said: "First of all, Mr Dlamini is from an organisation that holds principles that are completely irreconcilable with the constitution. All South Africans in constitutional democracy, including former president FW de Klerk, have a right to comment on developments."

Dlamini and Vavi ditched their central executive committee meeting, which was under way at Cosatu House, to be at the march. Vavi read out the memorandum that was delivered at the gallery.

Mantashe said their mission was complete after Murray and the gallery owners apologised in a letter for the hurt and pain caused, and verbally agreed to remove the website version of the painting.

The original painting that had been booked for display until next month was destroyed last week when two men - businessman Barend la Grange and Polokwane taxi driver Louis Mabokela - defaced it.

Nzimande said the painting should not be allowed to leave the country.

"It must not leave here. It must be destroyed once and for all," he said.

It is understood the German collector who bought the painting for R136,000 wants it as it is.

Nzimande also condemned what he said were "liberals who are disrespecting us. To whites, we are saying enough is enough."

Thousands of people who were bused by the ANC from provinces including Limpopo, Mpumalanga and Northern Cape walked from nearby Zoo Lake to the gallery. - nhlabathih@sowetan.co.za