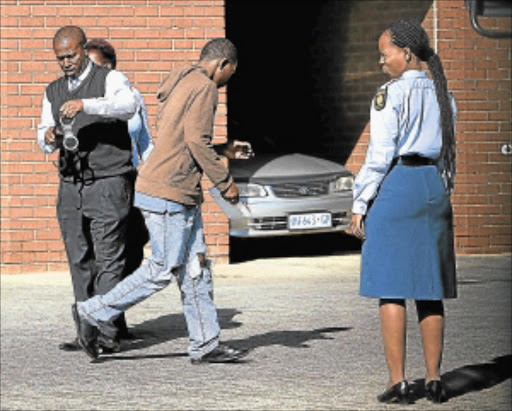 CASE CONTINUES: An accused in the gang-rape of a 17-year-old girl is seen outside the Roodepoort Magistrate's Court during a previous appearance. Photo: ALON SKUY

THE four minors who allegedly gang raped a mentally disabled teenager and recorded the incident were each granted R500 bail yesterday in the Roodepoort Magistrate's Court.

The minors were put under house arrest but would be moved from their homes to an undisclosed location.

Following yesterday's proceedings, which were held in camera, state advocate Carina Coetzee revealed that the minors would not face a rape charge.

Coetzee would not disclose why the state had opted to bring minimum charges against the minors rather than a charge of rape, only stating that it was "fair".

"It is only fair to them as minors to face minimum charges. We still have not finalised the charges," said Coetzee.

"We are very happy to announce that the four youngsters received bail. It was in the interest of justice," said Karam.

The 13-year-old minor, who was arrested along with the other accused, has not yet been charged. His criminal capacity will be determined within a month.

Karam said: "The 13-year-old minor will be appearing in court on May 17 to determine whether he has been appointed a psychiatrist who will help determine his criminal charges.

"We should bear in mind that he is, along with everyone else, deemed innocent until proven guilty."

Karam also urged to accept the court's decision because it was fair.

The three minors, all 17 years old, will stand trial on June 20 alongside the three adult accused.

Coetzee said that once investigations were completed, the prosecution will determine whether any charges would be dropped.