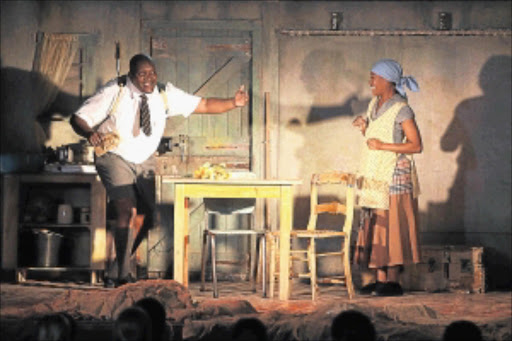 MORE than 3,000 pupils and 60 teachers from rural and peri-urban areas of the Eastern Cape will be experiencing education through theatre.

Assitej South Africa's production Izim'elincinci is based on the play The Ogreling, written by French-Canadian playwright Suzanne Lebeau.

The isiXhosa version has been translated by Sindiwe Magona and the production has been touring primary and high schools in the Eastern Cape since April 11 and will continue until May 17.

The play explores the world of a six-year-old ogre or izim who needs to discover his identity and what he is capable of.

He must then learn how to overcome those aspects of himself that he longs to escape.

The drama speaks of the battle between good and evil that exists in all of us, through the engaging interaction of the characters.

The cast consists of a single mother, played by Nonceba Didi, her oversized child, played by Thembani Luzipho, a rooster, a hyena and a little girl which are manipulated by puppeteer Beren Belknap.

The actors and actresses in the production are all qualified theatre scholars and the play is directed by Yvette Hardie who is assisted by Ntomboxolo Makhutshi.

Assitej SA is a registered non-profit organisation which brings people working in theatre together for the benefit of children and young people in South Africa.

The initiative is supported and funded by the National Lottery Distribution Trust Fund and the National Arts Council of South Africa.

As part of their five-week tour, the production made a stop at Merrifield College in East London yesterday.

Hardie , who is also director of Assitej SA and president of Assitej International, said she hoped pupil s and teachers would respond positively to the production.

"We hope that teachers will be inspired to use the play creatively in their classrooms, that learners will engage with the text.

"We are trying to show that theatre is a total learning resource and is hugely educational on every level," she said.

Merrifield English teacher Heidi Breetzke said she was excited at what the production would give pupils.

She said the school would become more involved with groups like Assitej in exposing theatre to rural communities.

"It's a fantastic opportunity to expose the learners to theatre as much as possible and in supporting organisations like Assitej, we enable them to be able to reach out to other rural areas," she said.

"We are fortunate as a school to be exposed to theatre, but others aren't and it's our impetus as a school to encourage outreach and we hope that even through this production it will open up opportunities to work with Assitej in the future. It's exciting to be part of the process."

Assitej SA will be visiting schools in Duncan Village and Mdantsane this week before concluding their East London leg of their tour tomorrow.