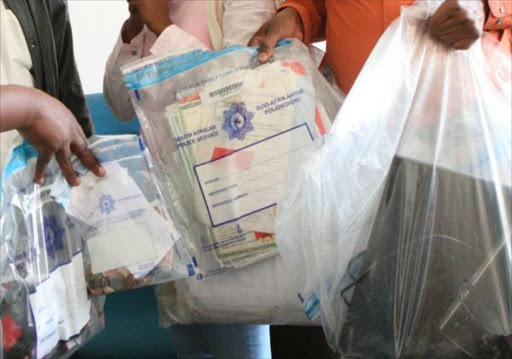 Hundreds of minibus taxis could be operating with fake certificates

POLICE have raided a building in downtown Johannesburg and made a shocking discovery ... fraudulent documents that taxi operators believe are the source of taxi violence in the country.

A woman was arrested during the raid. The 32-year-old woman, who cannot be named until she appears in court, was caught out by an undercover crime intelligence officer who posed as a taxi driver hoping to buy the fraudulent documents.

Taxi owners confirmed that there was a huge demand for illegal documents in the industry.

It was revealed that there is a syndicate involved in obtaining documents from the transport department in Gauteng and then selling them to taxi drivers and owners.

Gauteng traffic police spokeswoman Busaphi Nxumalo said more arrests will be made as they have information pertaining to other individuals associated with the alleged syndicate.

Police crime intelligence officers have been investigating the syndicate for six months when they realised that there were inconsistencies with the routes certain taxis take on the roads.

On investigation, they realised that some of the permits the taxi drivers had were not in the system and were therefore received fraudulently.

She was also selling long distance taxi permits for R450, and passenger liability letters for R350.

Both could only be obtained from the Gauteng transport department.

Nxumalo explained that the woman buys a bulk of "face values" (blank documents with the Gauteng traffic department emblem on it) for R1,200 and sells each document for R450.

"Most of the conflicts in the taxi industry are caused by this," Nxumalo said.

He also confirmed that there was someone within the Gauteng traffic department who was part of the syndicate selling the stamps and documents to the woman.

"Anyone found with fake or fraudulent documents will be arrested. All public transport vehicles will be stopped and have their documents verified," she said.

South African National Taxi Council (Santaco) spokesman Thabisho Molelwa condemned the selling and buying of these illegal documents. "We condemn that (behaviour) in the strongest possible terms," he said.

He said these illegal permits had the "potential of brewing conflicts that were long forgotten".

Molelwa explained that these illegal activities had been around for a long time. "Getting a permit is the source of a taxi owner's income because it allows a vehicle to be on the road," Molelwa said.

He said the permit problem highlighted the frustrations within the taxi industry.

The main implication of these illegal permits is that there will be illegal taxis on the roads which will lead to investors being unwilling to finance the industry.

"We want to urge people to report these people. These are the pure reasons that there are taxi wars," he said.

The woman will be charged with fraud and manufacturing of illegal documents.

A highly placed source in industry said there was a big market for the fraudulent documents.

"Nobody uses those documents but us. We are the customers.

"The permit is not that expensive when you buy it as umdubulo. It can be R400 depending on the seller," he said.

But the operator said there was no need to forge the passenger liability insurance document because it only cost R460 a year.

"The problem is that if people get injured and you have a forged document, what will happen to them?"

On the permits, he said that it was hard to find special permits during Easter holidays, so taxi owners would buy the illegal documents in order to make more money during the holidays.

"If you buy a stolen taxi and use umdubulo, you have to put that taxi in the same route where your other taxis are.

"Sometimes we use (umdubulo) on a taxi that is not even stolen. The problem with government is that you have to wait for long periods, that is why you end up buying from people," said the operator.

He said another contributing factor to the crime was the sale of licence discs, which are put on the taxis' windscreens.

He said discs were the most useful tools for stolen vehicles on the country's road.

"When people steal a taxi in Johannesburg, they do not have the time to change the chassis number. In order for the thieves to take the vehicle out of the province to, let's say, KwaZulu-Natal, they take their own vehicle registration and find the person to produce a disc which corresponds with the registration number.

"In that way, when the thieves meet the police en route to another province, they can pass through a road block because police do not search beyond these two points," he said.