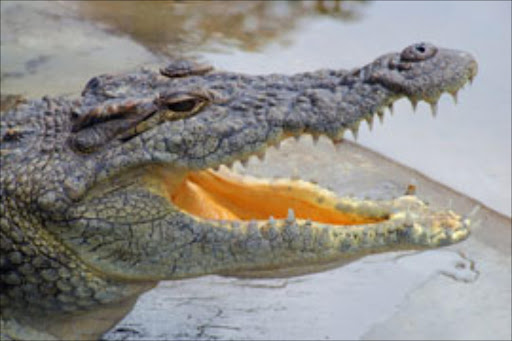 Pulled into water in front of her mom and children

A woman was killed by a crocodile at Lake St Lucia Estuary mouth in northern KwaZulu-Natal on Tuesday, the iSimangaliso Wetland Park authority said.

Thandazile Madela, 48, from Kwamsane, was retrieving fish at the water’s edge around 6.30am when the crocodile grabbed her arm and dragged her into the water, the authority said in a statement.

Her mother and children, aged 13 and 14, called for help.

A boat launch assistant on the beach heard them and alerted park staff.

“An immediate search was instituted by foot and boat, involving about 20 staff, but the crocodile repeatedly disappeared from view as the boat approached, hiding itself in reed beds.

“The searchers continued to pursue the crocodile until, over an hour later, it eventually released the body and disappeared,” the authority said.

iSimangaliso Authority CEO Andrew Zaloumis, who assisted at the scene, conveyed his condolences to Madela’s family and thanked staff, the police and bystanders who assisted in the search.

He urged holiday makers and locals to remember that the St Lucia Estuary forms part of the iSimangaliso Wetland Park and has one of the highest concentrations of hippos and crocodiles in southern Africa.

“Crocodiles are opportunistic predators that generally target fish, but will readily take animals or people near the water’s edge,” the authority said. “They tend to be more active in summer.”