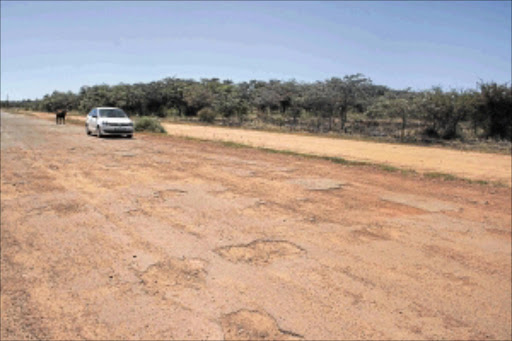 NEGLECTED: One of the roads that were left half-done when Moutse was transferred from Mpumalanga to Limpopo in 2005. PHOTO: Alfred Moselakgomo

FORMER president Nelson Mandela once said: "Many of our people in this country do not ask about computers, phones or television sets, they ask when will we get a road to our village"

I recalled these words over the weekend while driving in Spitspunt, a tiny village near Matlelerekeng outside Dennilton in Moutse West, Limpopo.

Though the village has a nice newly built school, as well as a multi-million rand healthcare centre, it does not have proper roads.

Residents say summer rains frequently make the existing roads all but impassable, while in winter, they generate constant choking dust.

"If you think our roads are bad, you have another think coming," said a villager, Lucas Hlongoane.

"You should come here after it has rained. All roads in the village become inaccessible. It really becomes a mess," he said.

For more than 30 years Spitspunt villagers have never had proper roads and even the gravel road, which was built about 15 years ago when the area was still under Mpumalanga, has faded away due to lack of maintenance.

Old damaged bridges are the only signs that the area once had a gravel road.

From the R46-million tarred road that runs between neighboring villages of Marapyane and Lefiso in Mpumalanga, a treacherous dirt road snakes through Spitspunt, the villagers of which have no choice but to use it to get to school, church, work, clinic and out of the village.

For decades now Spitspunt and three neighboring villages - which fall under the Ephraim Mogale Municipality in Limpopo - have been forced to use a poor excuse for a road.

The villages, Malebitsa, Tshikannosi and Klopper have a population of between 50,000 and 60,000.

The villages were, until 2005, under Mpumalanga but the Constitution Twelfth Amendment Act transferred Moutse from Mpumalanga to Limpopo.

Vehicles using the road run up punishing maintenance and repair bills, and drivers of sedans use the road at their peril - in places having to drive at less than 40kmh.

The community says when the area fell under Mpumalanga before 2005, the province allocated R50-million for the upgrading of the road between Senotlelo and Keerom, which was going to go past Spitspunt.

The project had already started when the area was moved to Limpopo and the road was left half done. Limpopo has allegedly refused to continue tarring the road, saying Mpumalanga must finish what it had started.

Mpumalanga says this is not possible because the area no longer falls under it.

"This is one of many reasons why we did not want our area to be taken to Limpopo," said another resident, Lenah Marakalla.

"We really felt vindicated when five departments were placed under administration because our message from the beginning was clear.

"We did not want Limpopo and now people can see why.

"Mpumalanga took care of us because though we still drove on a gravel road, it was being cared for. But since the area was transferred to Limpopo, service delivery swindled and I doubt if authorities in Polokwane are even aware that there is a village called Spitspunt in the province," Marakalla said.

But while residents complain about lack of roads in Spitspunt, the Limpopo government has spent R12-million building a school last year.

Since its establishment in the 1950s, Spitspunt had never had a high school and pupils were forced to walk close to 12km each day to and from the nearest school at GaMaria, Mpumalanga.

Ephraim Mogale municipality spokesman Jan Phasha said the issue of tarring Spitspunt and neighboring areas was the responsibility of the provincial roads and transport department.

"We understand the plight faced by these communities but our hands are tied as this is the responsibility of the department," Phasha said.

Department spokesman Thesan Moodley said his department would look into the matter.