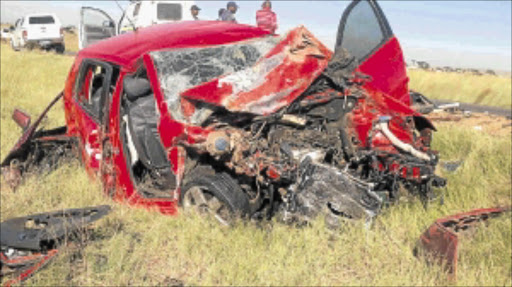 WRECKAGE: One of the vehicles that was involved in an accident on the Moloto road at the weekend. Ten people died.

TWO accidents on the notorious Moloto road claimed the lives of 10 people at the weekend.

Eight people were admitted to hospital after suffering injuries in the two separate accidents that took place within six hours between Saturday night and early Sunday morning.

In the first accident five people travelling in a bakkie died and five were seriously injured when the bakkie overturned while overtaking another vehicle at Kwaggafontein near Marble Hall on Saturday night at about 10pm.

The injured were rushed to KwaMhlanga Hospital.

Joseph Mabuza, provincial spokesman for the department of community safety, security and liaison, said the bakkie was transporting 10 people from a church service.

"Three family members, a father who was also the driver of the vehicle, his wife and son died in this accident," Mabuza said.

"The crash happened about a kilometre from the Kwaggafontein Plaza towards Marble Hall."

He said the second accident happened about three kilometres from the first one and it involved two vehicles that collided head-on on Sunday at about 5.40am.

The department's MEC, Vusi Shongwe, has sent his condolences to the families of the deceased. Mabuza said the names of the deceased would be released after their next of kin had been informed about the tragedy.