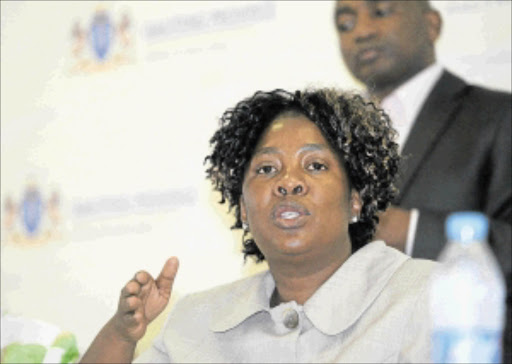 THE country's biggest hospital, Chris Hani-Baragwanath Academic, is infested with ghost doctors who are costing the province millions of rands in salaries and overtime claims.

This was revealed yesterday by MEC for health and social development, Ntombi Mekgwe.

Mekgwe said the department was investigating allegations that ghost doctors were claiming salaries and overtime pay from the hospital.

The hospital has 780 doctors on its payroll, but there are complaints from registrars that these doctors were not properly supervised.

Mekgwe said her department was in the process of verifying the list of doctors employed at the hospital.

"It is a problem. Supervisors meant to supervise registrars are not at work but later claim 100% salaries from us. So far nine doctors have been suspended," she said.

Mekgwe, who admitted that her department was in a financial crisis, also revealed that it currently owed the National Health Laboratory Service about R600-million.

"Since April 2011 we have paid NHLS R920-million, but there is a dispute about what we owe them because there are queries about some of their invoices. They are using some of our buildings and water and electricity," she said.

"We are in talks with them to resolve the matter. They are aware of the ghost workers."

She said some invoices were duplicated.

Mekgwe also said her department was owed a combined R1.4-billion by Limpopo, North West and Mpumalanga, the departments of correctional services, justice, labour, medical aids, private patients, the Road Accident Fund and SA Police Service for services, including the transfer of patients to various health facilities.

Mekgwe said they had written to the department of finance for assistance to help recoup the money.

"We also acknowledge the shortage of nurses. We have 20 trained theatre nurses and have an additional five from the defence force. We are going to change our recruitment strategies," she said.

Mekgwe promised that service providers owed money by her department would be paid in March and June.