Malema not in good standing - claim 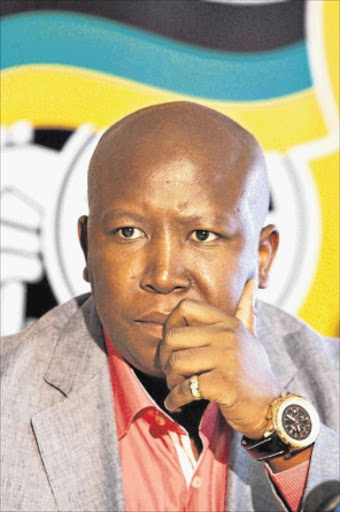 DEFIANT: Julius Malema says his enemies' celebrations will be short-lived.

THERE are allegations that suspended ANC Youth League president Julius Malema is not a member in good standing.

Malema, whose membership had allegedly not been renewed since 2009, was not present during a Milo Malatjie branch annual general meeting yesterday.

Malema and his lieutenants Jacob Lebogo and Jossie Buthane have allegedly refused to renew their membership of the branch in Seshego in Polokwane, Limpopo.

The league's membership is renewable annually and the last time Malema renewed his was in 2009.

Records in possession of Sowetan indicate that Malema last renewed his league membership on July 14 2009 after paying a R10 fee.

The documents indicate that Malema renewed his membership with the then branch secretary, Boy Mamabolo, with whom the embattled leader does not see eye-to-eye.

Mamabolo was touted as the new chairman of the branch during the AGM held at Mowana Lodge in Seshego yesterday.

Mamabolo said each year branches would approach members reminding them to renew their memberships.

He said the same was done to Malema, Lebogo and Buthane and the three failed to respond, allegedly on the basis that the league's Peter Mokaba region had been disbanded.

But the branch has not been dissolved and the region has since appealed against the decision to disband it.

Approached for comment, Malema would only say it was news to him that his membership was not renewed. He referred this reporter to Lebogo, who is the league's provincial secretary. Lebogo could not be reached yesterday.

Buthane, who is the branch ANC chairman, refuted claims that they did not renew their membership.

"Malema is a member in good standing, so is Lebogo and myself," Buthane said.