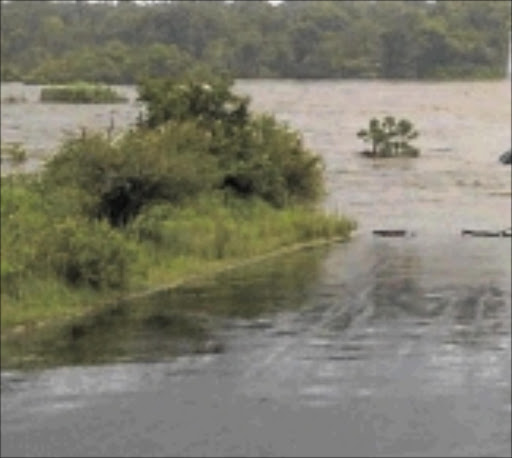 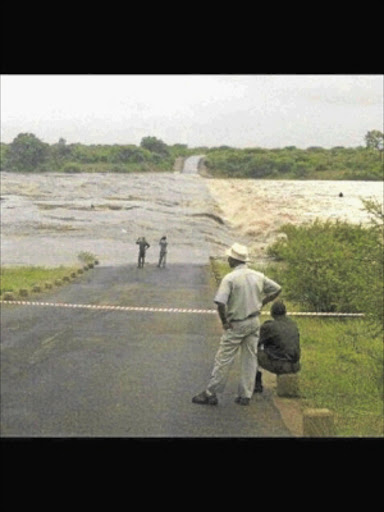 JACKIE Rodokanakis was woken up by her husband at 6am yesterday to "see a massive wall of water" outside their bedroom.

The stream 12m away from their private lodge at Katara camp in the Klaserie game reserve near the Kruger National Park had turned into a swelling mass of brown water.

Flooding across the Kruger and many parts of Mpumalanga and Limpopo forced authorities to close some of the gates to the park and evacuate stranded guests.

A Mpumalanga disaster management official said 50 pupils in the Bushbuckridge area were rescued by a military helicopter after their route home was blocked by floods.

"Within 15 minutes the water was halfway up the walls of our room," she said.

Katara camp owner Fred Crabbia said: "If it had happened between midnight and 3am, I don't think I'd be talking to you. No one would have been awake. The rooms would have been churning with water by the time anyone realised what was happening."

A group of six holiday makers on a night game drive were left stranded at a picnic site as water levels blocked their way out. They had to be airlifted to safety as the rain continued to come down.

Its weather station in Hoedspruit measured 267mm between 8am on Tuesday and 8am yesterday. A further 100mm of rain fell in six hours yesterday.

Water levels in Lower Sabi had reached the fence at the edge of the camp site, where about 30 people were evacuated yesterday.

One of the park's private game lodges, Phinda, was under water. An unknown number of guests had been evacuated from Phinda and Tinga private lodge, said Thakhuli.

The Skukuza and Letaba camps have been cut off. Staff accommodation in both camps was also flooded, he said.

The Crocodile Bridge gate and Giriyondo border post had been closed, as had been the Biyamiti, Shimuwini and Talamati camps. The extent of the damage caused by the flooding was not yet known, Thakhuli said.