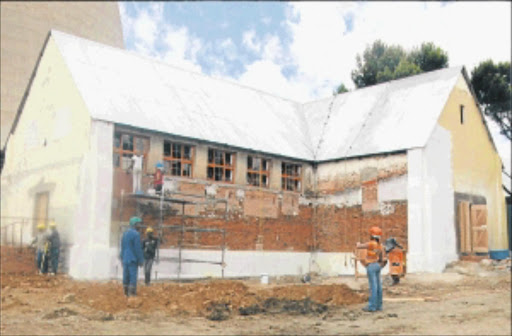 FINAL TOUCHES: The renovated Dutch Reformed Church in Waaihoek, Bloemfontein, is expected to be handed over to the ANC this week. Photo: Michael Tlhakudi

WORK on the Dutch Reformed Church in Waaihoek, Bloemfontein, where the ANC was formed in 1912, is nearing completion ahead of the centenary celebrations in Mangaung, Free State, on Friday.

Mangaung metro municipality earlier last year set aside R35-million for the renovation of the church that is expected to be turned into a national museum.

Now the first phase of the renovations is expected to be completed this week, just in time for the celebrations.

ANC Free State spokesman William Bulwana said the renovations, aimed at restoring the church to its original structure, have gone without hassles since they were started in October.

"We are happy with the progress made with the renovations," he said.

"We are thrilled that the church where the ANC was formed is getting a facelift."

He said what was vital was that the church would be turned into a museum where future generations would be kept in touch with the history of its 100 years of existence.

"The museum will be an important monument to retain the history of the ANC," he said.

He said the construction company that had been doing the renovations would hand the church over to us (ANC) this week.

The church is expected to hold a night vigil on Saturday ahead of President Jacob Zuma's speech on Sunday.

More than 100000 guests, including 60 heads of state from across the globe, have been invited to attend the celebrations and are expected to join Zuma for a gala dinner on Saturday night.

A host of activities have been lined-up for the duration of the celebrations.