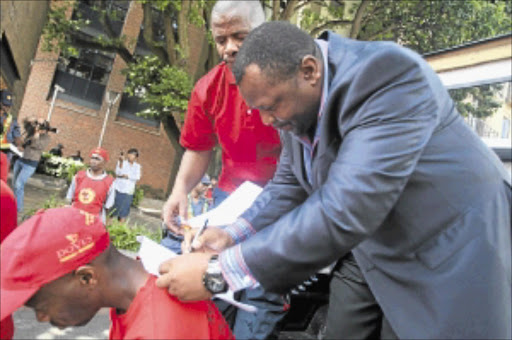 A QUIET elite business complex at Melrose Arch in Johannesburg was a hive of activity yesterday when about 4000 members of the National Union of Metalworkers of South Africa marched to the offices of Xstrata Alloys miningcompany there.

Numsa members at plants in Rustenburg, North West, have been on strike for three weeks demanding parity in salaries with their colleagues in Mpumalanga, an across the board 10% wage increases and R3500 housing subsidies.

Numsa president Cedric Gina said they wanted the company to do away with the wage gap and pay workers equally for the same kind of work and levels.

He said the wage disparity at Xstrata varied between 14% and 39%.

Gina, who described the gap as an apartheid-era pay structure, said the company, the world's largest producer of ferrochrome, told them that workers in Mpumalanga were paid more because Rustenburg plants used advanced technology.

"It is not our problem that workers in Mpumalanga are paid more because the Rustenburg plants are using advanced technology to produce ferrochrome. We want workers to be paid equally for the same quality work they do," Gina said.

Gina said the trade union was giving company management 48 hours to respond to their demands.

He said if it failed to do so, they would seek political intervention.

He said Numsa would call on Mineral Resources Minister Susan Shabangu to withdraw Xstrata's mining licence if the company continued to undermine the mining charter.

Cosatu 's second deputy president Zingiswa Losi told striking workers, who were toyi-toying at the complex's Athol Street gate, that their action was part of Cosatu's campaign for a living wage.

Xstrata's executive director of human resources Edwin Hlatshwayo promised that the company would respond to the workers within the stipulated period.