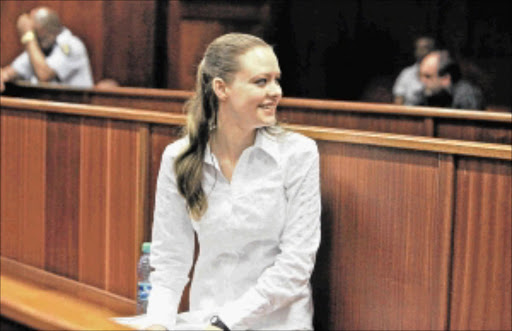 ACCUSED: Nicolette Lotter at the Durban High Court during her trial for the brutal murder of her parents. Photo: TEBOGO LETSIE

SIBLINGS Nicolette and Hardus Lotter yesterday wept in the dock when the Durban high court heard that their parents had died "long and painful" deaths.

Hardus shut his eyes when Dr Diagasen Pillay explained details of the postmortem of Riekie Lotter,which revealed how the 52-year-old mother was killed on July 19 2008.

Pillay told the court that Riekie had sustained multiple penetrating injuries to her left lung, deep scalp bruising and might have been struck in the face.

When Pillay said the postmortem results were consistent with the details about Riekie's murder in her son's confession to the police, Hardus buried his head in his hands and wept more.

The confession stated: "I came from behind and shocked my mother with a stun gun and pushed her off the chair. She started screaming. While I was shocking my mother, Nicky (Nicolette) was holding her down. I shocked her in the neck and she carried on screaming.

We tried with our hands to smother her screams. The whole time my mother was fighting back.

"I hit her with my elbow on her temple and she quietened down. We placed a sock in her mouth. We carried on shocking her for about 10 minutes while I was also hitting her with my fist.

"We tried to smother her with a black plastic bag but she managed to tear it. We managed to subdue her. I was holding her arms, while Nicky tried to inject into her veins with a syringe. Nicky did not manage to find the vein."

According to the confession, Hardus sat on his mother for at least 15 minutes while his sister went to the shops. When Nicolette came back, she stabbed her mother repeatedly, he said.

Yesterday Nicolette wiped away tears at details of her father's death. Pillay said 53-year-old Johan was strangled with a cord.

The court then heard Hardus' confession.

"My dad was sleeping. As I wanted to wrap the cord around his neck he woke up. I managed to get the cord around his neck and started pulling. At this stage my dad was fighting back profusely. We wrestled for about 30 minutes to an hour before I got the upper-hand and managed to strangle my dad. I sat on him for about 20 minutes, pulling the cord to make sure that he was dead."

The state alleges Hardus, Nicolette and her former boyfriend, Mathew Naidoo, planned the double murder to gain the inheritance.

Naidoo yesterday had a trial within a trial on the admissibility of his confession. Naidoo, accused of being the mastermind in the killings, claimed he was assaulted by the police.

He maintained that he "did not commit any crime".