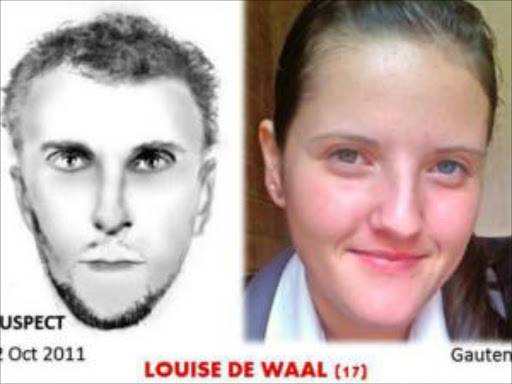 He has confessed - police

“He handed himself in at the Margate police station [in KwaZulu-Natal], this morning,” acting Gauteng police commissioner Maj-Gen Nobesuthu Masiya told reporters in Johannesburg.

She said Warrant Officer Peet du Toit, who headed up the investigation into De Waal’s kidnapping, managed to get hold of the man through his brother, and convinced him to hand himself in.

The man was allegedly linked to nine cases of rape and one of murder, she said.

The crimes were attributed to a man nicknamed the “Sunday rapist”.

“The KZN police are still interviewing the man. He has not yet confessed to the other rapes and the murder,” she said.

“The man usually goes out to prowl on Sunday between 10am and 1pm in certain suburbs in Gauteng and the North West, and looks for girls between the ages of 10 and 17,” he said.

“He then drives 20 or 30km away and rapes the girls. He often takes mementos from them like head-bands or panties.”

Masiya said the man, in his 30s, had a previous conviction for sexual assault.

“He was arrested in 2007, convicted and sentenced to three years in prison. The sentence was suspended for three years. He spent time doing community service.”

De Waal was kidnapped at gunpoint while walking to school in White Ridge, Florida, west of Johannesburg, on Wednesday morning.

According to reports, a bakkie pulled up alongside two girls walking on the corner of Rina and Herman streets in White Ridge around 7am.

“A man got out and ordered the teenager into the vehicle. When the girl refused, he pointed a firearm at her until she complied,” police said.

The other girl, Natasha Gordon, ran away and the bakkie sped off with her friend.

Her burnt body was later found on a farm in Magaliesberg.

Louise's mother, Shireen de Waal, speculated to Beeld about her daughter’s modelling pictures, saying she wondered if she had posted them on social networking site Facebook.

“Louise was never violent, she never felt hatred for anyone, she’s my angel. I truly believe she’s a spirited child who God has touched,” the grieving mom told The Star.