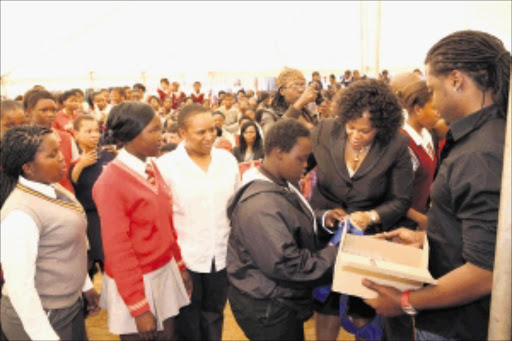 THE Gauteng government's dignity packs project for needy girls, launched in Zuurbekom on Wednesday, will help keep female pupils from bunking classes when they have their periods.

The project was launched by Premier Nomvula Mokonyane at the Zuurbekom Intermediate School.

Mokonyane handed out free sanitary pads to those who needed them the most and stressed that her government wanted to restore their dignity.

"Some of the girls said they were happy that they at least would not miss school because they did not have pads. They had indicated that in some instances they had had to use a cloth instead of pads. Giving them the pads meant a lot to them," Mokonyane said.

The premier admitted that it had been a concern to them that some of the pupils missed three days of classes a month when they had their periods since they could not afford to buy pads.

The provincial government will assist these poor pupils across the province with sanitary towels and toiletries each and every month.

Mokonyane said her government wanted to give pupils the dignity they deserved and make sure that they were clean and healthy during their monthly periods.

She also warned the pupils not to think that having periods meant that they were now adults.

Nicolene Masia, 15, a pupil at Randfontein Secondary School, said: "This has never happened to us before. I thank our premier and her government for taking care of our needs."

Another pupi, Lerato Vilakazi, 17, from Simunye Secondary School, said her mother struggled to buy her toiletries because she was unemployed.