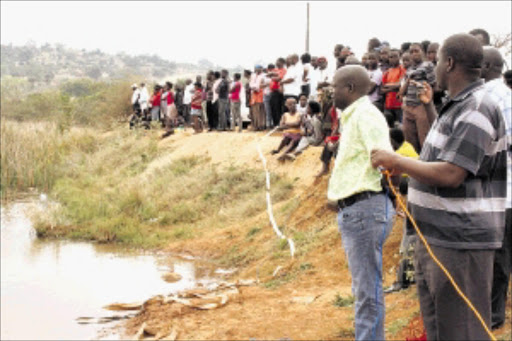 SHOCKED: Community members of Thohoyandou, Limpopo, look on as police search for two bodies in a dam. PHOTO: BENSON NTLEMO

THE family of a woman, who killed her 2-year-old child by throwing her into a dam before hanging herself yesterday, attributed her shocking act to poverty and poor health.

Tambudzeni Mulaudzi of Lufule, east of Thohoyandou, Limpopo, left a note over the weekend in which she said she would kill herself.

"She said she had been ill for some time," her aunt Nyawhwivhilu Sikhwivhilu said yesterday. "It would not heal and she was suffering."

Mulaudzi, a mother of four, disappeared from home on Saturday with her son.

"After the death of her husband three years ago she struggled to support her children since she was unemployed," Sikhwivhilu said.

Members of the community found the baby in the dam. A search for the woman, who had stated in the letter that her body would also be found in the dam, continued. The dam was emptied but the woman's body was not there.

During a search the police later found the body hanging from a nearby tree.

"We searched and after finding the body of her child we summoned the help of divers, not knowing that her body was not in the dam but she had hanged herself in a nearby tree," Malelo said.

He said an inquest docket had been opened.