Only one arrest after service delivery protest 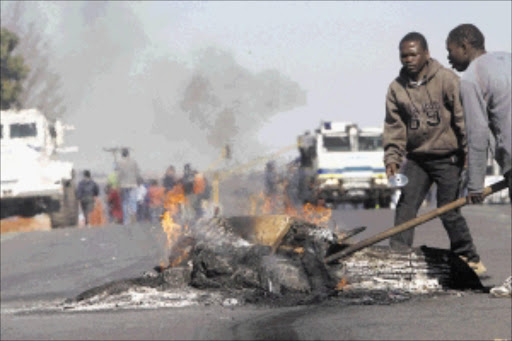 POLICE have made only one arrest since the violent service delivery protest in Zandspruit, north of Johannesburg, last week

Residents petrol-bombed a classroom at a local school on Friday night, reportedly over poor service delivery.

"It was a prefab classroom in a local primary school that burnt to the ground, but the fire did not reach other classrooms," Warrant Officer Balan Muthan said.

He could not provide the name of the school, and no one was injured as the school was closed.

"Zandspruit has been quiet since Friday with no protests taking place. No one else has been arrested," said Gauteng police spokesperson Katlego Mogale yesterday.

Violence broke out on Thursday when about 200 protesters barricaded Beyers Naudé Drive with tyres, and pelted passing motorists and police officers with stones.

Residents turned on police, who were firing teargas and rubber bullets, as they tried to stop protesters from throwing petrol bombs and rubbish on the road.